The team returned to the Howick Historical village for yet again a series of solo investigations – with a slight twist. Previously we had all taken turns (on different nights) doing a full, solo investigation on the largest of the houses “Puhinui house” and had all come away with more questions than answers afterwards and we could all agree that the building did require further investigation.

We decided on splitting the investigation into two parts. The first half: In the earlier hours of the evening the team set up cameras and equipment throughout Puhinui house and conducted communication sessions in various rooms for a few hours before leaving Marlene to Investigate Puhinui for the rest of the night by herself and heading off to the second half of the investigation: A solo investigation of one of the other Buildings in the village – I chose to investigate and spend the night in the Church.

The team arrived at Puhinui house around 7:30pm, with enough sunlight left to unload our cars and make a base out of the living room before It got dark. Even though we were all aware that this would be Marlene’s introduction to the solo investigations at Puhinui, as a team we were all determined to set up still cameras on tripods and Wireless DVR cameras throughout the building, knowing from experience that many of the sounds and potential activity during our own solo investigations happened off camera, so we did our best to capture as many angles as possible.

After finishing up in Puhinui house the team left Marlene to her devices and we all went our separate ways and spent the remainder of the night/morning in the building of our choice within the village. I had picked the Old Church near the school at the furthest end of the village. There’s not much to the Church really, it’s rather small in size with no more than 10 rows of pews on either side, a small organ in the left hand corner and a pulpit in the right hand corner.

To be fair this wasn’t the first time I had visited or Investigated the church, I was familiar with it through school trips as a child and I’d even attended weddings there as I believe it can be hired out (or at least used to be available) and in terms of investigating we have visited the Church on numerous occasions during public investigations, and I have to be honest I’ve never felt really felt that it was haunted at all. It had it’s usual old building creaks and groans but nothing beyond that.

A solo investigation in the Church however, was a new experience and I have to judge my impressions and reactions accordingly. 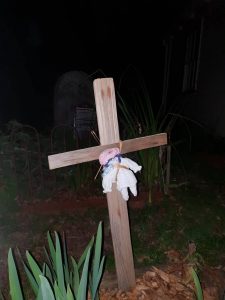 As I walked up the path to the white picket fence surrounding the Church – sea shell and gravel crunching under foot with each step, giving away my position and disturbing the ducks in the nearby pond. I open the gate and take a step into the church boundary, and as if out of nowhere a loud “clunk” rattled the iron roof of the church followed by a devilish growl coming from the tall tree that towered above. And then another “clunk” this time hitting the picket fence behind me and followed by a rustling of branches coming from one of the opposite trees. I was pretty sure I counted at least three of them, I could hear them but I couldn’t see them….but they could obviously see me and they were the most territorial Possums that I’ve ever encountered and they made it known that I was in their space by pelting me with twigs and acorns…..well at least that’s what I’m assuming they were throwing so either way it was probably just as well that they didn’t have very good aim.

Now, one of the more commonly asked questions we get asked by fans and followers on Facebook is “Do you ever get scared?” And as much as I’d like to say that I don’t get scared it’s actually far from the truth – in fact I challenge anyone to not be scared by the unexpected “jump scare”, no one is immune, especially when distracted by feral (possibly rabid – who knows?) critters. So as I open the doors to the Church I happen to trigger the sensor that automatically plays organ music with many voices singing hymns in the background. I jumped a little, I may have even said a few hail Marys and full disclosure we did laugh earlier on in the night when the same thing happened to Mark in the smaller pre-school building. I guess we can thank Karma for that one but in my defence it was completely dark and I hadn’t found the light switch yet – and it was a solo investigation so I wasn’t expecting any other voices.

Once settled I lay my sleeping bag and pillow down the aisle in between the pews, and set up cameras to record for a solo communications session. I switched out the lights and sat in one of the pews, camera rolling, audio recorder rolling and headphones on amplifying every sound. It was deathly quiet throughout the remainder of the night, again only normal building sounds were the most consistent noises. At one point I thought I did hear shuffling behind me as If someone was walking down the aisle but I’ve since dismissed the sound as being trees blowing in the wind outside. I was startled again for a second time during the communication session as I sat back in the pew it let out an almighty cracking sound (amplified greatly by the headphones) I said a few words that probably shouldn’t have been said in a church and continued the rest of the session without the headphones.

There were no abnormal spikes in EMF from celsensor or the Para-pod that had been placed at opposite ends of the church and temperatures remained as expected throughout the night.

Or at least I thought.

Marlene: Know you are usually the first one up, if so please come over and save me from this torture.

Sam: Did you manage to get any sleep

Sam: What’s happening over there? Lots of noises going on upstairs?

Marlene: U have no idea! And I watched a candle fall down piano

Marlene: My nerves are shot to shitt

Sam: I bet. Do you need someone to come over?

Marlene: If you are up, yes please

Marlene: or anyone that is up!

Sam: Ok I’ll be over shortly

Sam: Ok….so I’m locked in the church. I’m trying to get out but the door wont open.

Marlene: Ok I am coming

Sam: I think It needs the Key

Marlene: Only Mark has the Key

Sam (to group message) : If anyone happens to have the key…I’m kinda locked in the church and can’t get out. I’m too proper to do a wee in the corner

Sam (to group message): It’s ok, I used my Macguyver skills and an old JBHifi voucher to break free.

So I manage to finally get out of the church after about 15 minutes of trying and as promised there was Marlene outside waiting looking a little bit tired and a lot shaken from her night in Puhinui. We walked back to Puhinui where I made us both a coffee and we sat outside on the veranda and talked about her night until the sun came up and the rest of the team eventually woke.

During this time on the veranda our conversation was interrupted by a very loud scratching coming from inside the wall behind me, it started from underneath the floor and made its way up to the ceiling. I inspected the wall from inside the house (dining room wall) and could hear the same sound. I filmed part of the sound for reference and concluded that it was likely rats inside the wall – feeling that this was important to note and consider for any sounds that may be heard in any of our investigations in this house.

There was one part of our conversation that stuck with me, and it was when Marlene told me that she was confident right up until the team left, and then the atmosphere in Puhinui changed very quickly. 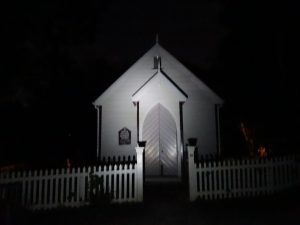 One of my biggest areas of interest since joining the group is how fear and anxiety could play a bigger part in what we experience and how we perceive things in general. Is it possible that we could have added to Marlene’s expectations by telling her about our own experiences during our solo investigations in that house – transferring our impressions of what we believe happened on to her, how much did the power of suggestion play on Marlene’s experience, or any of our own experiences beforehand for that matter. But How do we measure that? How do we measure how much fear, anxiety, adrenaline etc play a part in what we may claim to be a paranormal experience? Is it worth while measuring heart rate? Which would mean being strapped up to something a bit more thorough than just a fitbit for the duration of the night and comparing the results against a timeline of experiences. No doubt there will be a spike at the point of being frightened, but I’d be more interested to see any changes in heart rate leading up to that point – much like in the movies when the music changes leading up to a jump scare, you know it’s coming but you don’t know when. If there is an expectation of activity that could happen in a certain room and your anxiety builds until something does happen, be it big or small it’s enough to get anyone thinking irrationally if you’re already on your way to working yourself up.

It was an interesting night, so I don’t regret anything that we did or didn’t do. I think we used our time wisely. There are many more buildings in the village that we didn’t spend the night in, so given the opportunity again it would be interesting to try another building out for the night.