On this night Mark, Barbara, Marlene, Sam and Lisa spent the night sleeping / investigating solo within the village. Each team member staying alone in one of the many buildings. Just themselves and whatever equipment or techniques they might choose to utilise that night for their investigation. Sam in the little Church House, Barbara in the Court House, Lisa in Eckford’s Maraetai Homestead, Mark in Johnson’s Cottage (Children’s toy room) and Marlene getting her turn at staying solo in the very intriguing Puhinui Homestead. 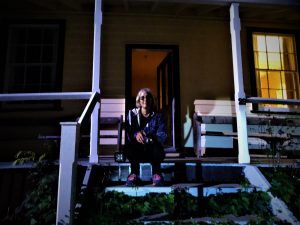 This is Lisa’s report on her overnight stay in Eckfords Farm Homestead.

Eckfords Farm Homestead was built in 1851 and belonged to Thomas Eckford and his family on their 368-acre farm at Maraetai.

The Couldrey family purchased the farm in 1877 and enlarged the original four-roomed cottage by adding verandas on three sides. Eleven years later a small post office was added to the building to serve local families in the area, for which the Couldreys received 30 shillings a year.

The farm was then subdivided in 1916 and the house sold to Ian Strachan, whose son Graham donated it to the Howick and Districts Historical Society in 1977.

The cottage underwent restoration fairly recently. The village applied to the Foundation North for funding and was granted “a generous” $137,000 to help complete the project. The project was carried out by Historic Building Specialists. They were able to add the rebuilding of the post office and patio area at the rear of the building into the scope of work. The Howick Historical Village board has now set up the homestead with at textile and sewing area. This was a very important occupation that women did back in the day. They would knit the socks, patch socks and darn the holes.

Full moon (or close to full)

Temperature Outside – Around 19ºC

This particular night was solo night. All the team were staying in various cottages or buildings at the site. I arrived at the site about 8 pm. The team walked around the village and in and out of buildings to get a feel for the different places; we discussed which buildings we’d like to spend the night in. I choose Eckfords Farm Homestead. I knew from a previous Haunted Auckland visit to Howick Historical Village, that an EVP had been captured there. The EVP was an electronic sounding female voice saying, “white dress”. The team believed this was possibly connected to one of the mannequins in the room which had recently been changed from wearing a white to blue dress. I was hoping there might be some potential for getting activity or more EVPs or activity.

On first entering the homestead, it felt quite cosy, non-threatening. The room had a lot of mannequins representing woman working with textiles. Mannequins for me always make the place feel a little creepy, so that was the only thing I wasn’t too keen on.

It was a fairly small cottage with 2 main living rooms separated by a corridor. Another area of the homestead had recently been opened up, this was likely to have been the kitchen area at one time. One room had various mannequins representing women working with textiles and sewing with sewing machines. The other main room had mannequins displaying items of old clothing on display. The recently opened room had various sewing machines and textiles on display. The main room had a really nice original fire place and there were old ornaments and antiques around the room. I decided to set my bed up in the main room by the fire place spent the night.

Temperatures were fairly constant during the evening. I’m not sure what the temperature was by morning. Overall it was quite warm in the house.

My solo time in the homestead started around 2 am, after we had completed around 6 hours of investigation in the nearby Puhinui Homestead.

I set up my video camera and recorded a communication attempt.

I invited anyone there to talk. I made comments about the house and asked if it was OK that I spent the night there. I asked if they minded all the people visiting the house. Other questions included asking them what they used to do for work, what they used to do for Easter etc. My EVP session lasted about 30 min. but unfortunately I didn’t get any responses to my questions. After taking some photos around the cottage I wrapped up about 3 am to try and get some sleep. I left the voice recorder going all night, but the cottage was quiet (apart from some snoring!).

For this particular investigation, I didn’t capture anything to convince me that the cottage is haunted. I felt quite relaxed there and didn’t get any feelings of something there with me or being watched. It was quite a different feeling to being along in Puhinui house. However, in previous investigations some interesting audio has been captured, so I’d be interested in trying a second solo stay there again sometime.