The principle goals of this project were to at first try our luck at ascertaining whether there may or not be some form of residual remnant, or possible paranormal activity present in any of the other houses and buildings with the village; and if so, attempt to either experience or observe first hand, document or record the alleged activity, or find rational explanations to the incidents via recreation or re-occurrence.

Whilst we have had some very intriguing occurrences during our research visits to Puhinui Homestead, it may stand to be that this grand old house might be the only venue on the village with a possible haunting. We must keep in mind, the simple fact that, just because a house is old, or historical, doesn’t mean that it is haunted.

Also, we need to entertain the possibility that maybe, just maybe, ghosts don’t exist at all.

But then, what have people really seen or encountered when they put forward claims of witnessing a possibly paranormal occurrence? They can’t all be crazy, deluded, hallucinating or straight out lying…. can they?

Either way, we aren’t going to find any answers to these spooky mysteries if we just sit at our computers accepting everything we are spoon fed by those claiming to be experts. On the same count, we can’t just blindly believe at face value the stories of alleged spooks we are hearing as well. The simple goal – To find out first hand, and for ourselves.

As they say nothing ventured, nothing gained. The only way we were going to find out if there was anything existing of paranormal interest, would be to spend time alone in the homes. In near complete peace and quiet, at night. No disturbances, no passers by or road noise to contaminate our data and recordings. Still not an ideal or fully controlled investigation set-up; but a good starting point and better than it being done during the daytime.

Activity and sightings in a few of the village houses have been reported from various people through the years; by both patrons and staff. Members of our team have also observed activity and seen things during investigations. Audio equipment has recorded sounds that we have as yet been unable to find suitable explanations for.

After we had put in a good six hours of investigation time in the nearby Puhinui Homestead that night, it was around 2am that we all divided up and went our separate ways back to our spooky abodes for the rest of the night / morning.

My house of choice this time was Johnson’s Cottage (also known as the Toy Room). 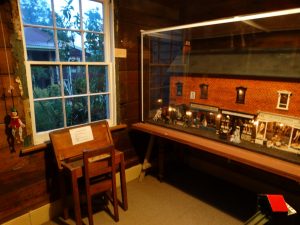 Inside is an array of vintage handmade wooden children’s toys on display and for playing with. In one corner, a huge glass display case containing a very detailed and skilfully created diorama of a little town; complete with towns people going about their daily business. There are wooden clowns that wiggle and wobble their way upwards at the tugging of strings, a wooden hand painted toy horse on wheels hangs from the rafters, a dolls house, big old chest of period dress- up clothing, a piano, glass cases of taxidermy animals, toy cars and many artefacts that would have equalled X-Box thrill factor when unwrapped at Christmas time back in the day.

I will admit that it had been a long day and I was tired. It was a work day so getting up at 6am meant by 2am next day I was really wanting to just snuggle up in my sleeping bag and get a few hours kip before we were to rise, pack up and head home.

I had set up my equipment earlier in the evening, so really all I had to do was plant the tripod mounted Nightshot video camera in one corner and hit the record button. I managed to stay awake for another hour and a half (or thereabouts); chatting away to the empty room ( or any spook resident that may still reside ). I did the usual generic introduction and invited them to come and chat for a bit. I had my phone and still camera beside me so snapped a few random pics as I lay there in between scrolling my Facebook news feed and messages. Also, in place and armed for action were a few atmospheric monitoring devices and motion sensor cameras and lights that would either be triggered by, or data record any sudden changes in temperature, EMF levels, vibration or movement in the room.

It must have been a bit around 4am…..ish, when I was suddenly woken by my phone right beside my ear chiming off at a ridiculously and unusually loud volume to alert me on an incoming call. Unusual because I never have it set that loud. Usually just at half way.

It was Marlene. She sounded rattled and on edge. Things were happening.

I talked her through it (as best I could in my hazy, half asleep state) and offered to come and check on her. Though scared and shaking she chose to tough it out and keep going. Totally proud of her for making that decision. Others might have fled in fear. She stood strong and carried on with her investigation.

Back at my cottage however, the action wasn’t really as intense as I would have preferred it.

A couple of minor incidents of possible interest occurred; one being around 3am ….ish. As I was dozing off, I heard some light shuffling at the front door, like someone was outside. Moments later the door handle creaked (just once) as if someone was trying to open it. I assumed it was one of the team wanting to talk to me. I later thought it was unusual that they hadn’t tried knocking. No one was there when I got up to check. The door was unlocked, so whomever it was could certainly have opened it if they wanted too.

At one stage, there was a scratching sound behind me on the wall. It moved up the wall and after a few clumsy sounding bangs and thuds, made its way up into the ceiling. I’m guessing it was a possum. Sounded a bit too heavy to be a rat. I never saw it, but from the sound it was making, I could tell it had claws.

The only other incident that ill mention was around 2.45. A wooden sounding ‘’click click’’ clatter that I assumed was a wooden toy adjusting itself on its string cord. Well I assumed that, but in my comatose state of tiredness I wasn’t really in any position to sit up and start getting rational.

All up, a quiet night really; but still great to be back in the Village doing what I love doing. We totally recommend you pack up the family one weekend and make a day of it there.

The Howick Historical Village is certainly an interesting and intriguing location to spend time in. Time we are very grateful to the management for generously allowing us and trusting us enough to spend the amount of time researching there we have been fortunate and privileged to have been given.

Spooks, or no spooks, its all about the mystery and the journey!