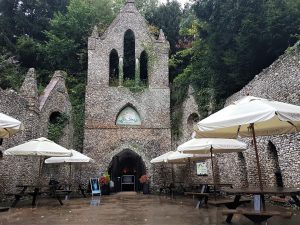 The Hellfire Caves (also known as the West Wycombe Caves) are a network of man-made chalk and flint caverns which extend a quarter of a mile (500 metres) underground. They are situated above the village of West Wycombe, at the southern edge of the Chiltern Hills near High Wycombe in Buckinghamshire, Southeast England.

According to Horace Walpole, the members’ “practice was rigorously pagan: Bacchus and Venus were the deities to whom they almost publicly sacrificed; and the nymphs and the hogsheads that were laid in against the festivals of this new church, sufficiently informed the neighbourhood of the complexion of those hermits.”

After the demise of the Hellfire Club and Sir Francis Dashwood’s death in 1781, the caves were disused from 1780 to the late 1940s, and fell into disrepair.

During the Second World War plans were made to use the caves as a large air-raid shelter if nearby towns were bombed, but Buckinghamshire’s rural position meant that High Wycombe and surrounding towns were not an enemy target, and so the plans were not carried out.

During the late 1940s and early 1950s the caves were renovated and turned into a local visitor attraction by the late Sir Francis Dashwood (11th Baronet), who used the profit earned to refurbish the dil