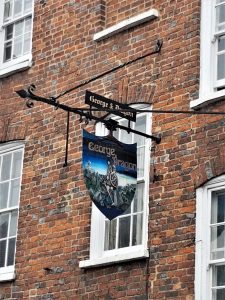 Suki, a beautiful 16 year old barmaid who worked at the George & Dragon pub in the late 18th century. Suki fell for a handsome, distinguished gentleman who was passing through the village, much to the annoyance of three local lads who had desires on the girl themselves. By way of getting back at her, they sent a message to Suki from the gentleman asking her to meet him at the cave at night wearing a white dress. So off she went in her finest white dress believing they were going to run away together & marry. She entered the caves only to realise the message had been a hoax. The lads started laughing hysterically at Suki. The girl was furious & started throwing rocks at them. The lads retaliated by throwing them back at her, but one struck Suki on the head & knocked her unconscious. She was secretly brought back to her room at the Inn, but the next morning, she was found dead.

Sukie has been seen many times in the room and also gliding along the corridor outside, mainly in the early hours of the morning. She is still seen, wearing her beautiful white dress and there is a strange coldness in the room where she breathed her last.

Another 18th-century guest was reportedly robbed and murdered at the George and Dragon, contributing another unquiet spirit to the pub’s collection of regulars. He is said to manifest himself in the shape of heavy footsteps going down the main staircase.

The George and Dragon is also said to be home to several other spirits, but it’s the tragic story of Sukie which has captured the imagination of visitors most strongly, and she’s the spirit most visitors would love to meet.