I ﬁrst heard about Rex Gilroy as a child. Perhaps about 1980, or thereabouts. I was a budding young cryptozoologist / paranormal researcher that would spend my time reading up every book or article I could ﬁnd on the subjects. I also collected newspaper clippings. In my collection I have clippings that mention Rex Gilroy.
His explorations around Australia, and more importantly to me, his trips to New Zealand in search of lake monsters, the elusive hairy Moehau and following up on sightings of a group of moa reported to be living in New Zealand’s densest forest ranges. To me, he was a real life Indiana Jones. I wanted to be like him. I made it a goal to meet this guy one day. Meet, talk and, if the planets were in alignment, explore with him.
Fast forward to Paracon Australia 2014. I was asked to do a talk about NZ cryptids. I was excited, nervous and honoured. Then I read that Rex was on the bill. The goal I made as a child was actually going to happen!
….and here we are again; Paracon Australia 2015. Rex and myself are both on the bill. Rex has promised to take me out exploring afterwards, and I’ve been asked by the Director to do this magazine interview with him …..yep, life sure is good right now!

So Rex, tell us a bit about your childhood and life growing up. Can you remember the moment when the yowie spark ignited and your obsession started?

I grew up on a farm on the Georges River at Lansvale, outside Cabramatta [born Nov 8th 1943]. The area, 30 kilometres south-west of the Sydney CBD and now built on, was then an area of farms and bushland and it was in the bush that Ibecame fascinated by insects and spiders by the age of seven. This led me to collect insects, then rocks, which I kept in shoe boxes. At primary school I read all the books I could ﬁnd in the school library concerning insects and native animals. Going to Liverpool Boys High School in 1957, I continued my interests and by now had learnt how to collect, record and display insects and spiders. Meanwhile, whilst still very young, my dad used to tell me stories of his youth. Growing up in Scotland, the ruined castles, and ‘Nessie’. By High School I had become interested in archaeology and mystery animals as a result! The school library contained old books on the Aboriginal myths and legends among which was one with tales about the Hairy man, or Yowie, to which I was immediately drawn.

In the past you’ve been labelled ”eccentric”, and some of your methodology and theories have been put to question by people with differing views. I for one love this quirk in people and consider myself a little eccentric in my own way too. But do you feel this label is justified, or is it just a matter of being misunderstood?

‘Eccentric’ I may be, yet if I were not, I would not have been able to accomplish all the great discoveries I have made in a lifetime’s research. I have gathered the largest privately owned natural science collection in Australia, in the course of which I have made many important discoveries. Being an amateur, it is only natural that the conservative university-based scientific fraternity of ‘desk-professors’ criticise my ‘methodology’ and theories and my many jealous rivals frequently attempt to discredit me with many untrue statements and attacks which have become quite slanderous at times. The trouble with these people is that, unlike them, I steer clear of sensationalism – ie organising well-publicised media-backed ‘Yowie hunts’.

Your theory on the yowie as being a direct relative of Homo Erectus; has this always been your conclusion, or has this changed through the years as evidence has been found?

As my book The Yowie Mystery – Living Fossils from the Dreamtime demonstrates, I have given scientific credibility to Australian relict hominin/Cryptozoological research. My jealous rivals have no credibility. So they attempt to have me pushed aside from the very research that I founded back in 1957. I have revealed the ‘Fossil Foundations’ of Australian relict hominology. By presenting a wide array of fossil remains I have shown that the Yowie is a composite creature of ancient Aboriginal traditions, consisting of four races – a giant-size and average modern human form of living Homo erectus as well as a pygmy race, ie the ‘Little hairy people’. The Yowies, or ‘Hairy People’ were called such because of the marsupial hide garments they wore/wear. Being Homo erectus they also know the manufacture of ﬁre, stone, bone and wooden implements. The fourth race is something else, a primitive ape-like form that lives on an herbivorous diet and is not a toolmaker or ﬁre-maker. The physical features of this race I have compared with those of Australopithecines. I possess fossil skull-types from Australia to back up my claims. My rivals have not one piece of scientiﬁc evidence to back up their so-called ‘research’. None of them have any grounding in primate/hominin anatomy or physiology. To be precise, they are on a dead-end trip to nowhere.

I’ve always loved your incredible energy and passion for this ﬁeld and have to say you’ve been a huge inspiration to me, so it was a thrill to ﬁnally get to meet and spend time with you after years of following your extensive research work. I’ve always appreciated your honesty, in stating that your theories on cryptids are just that, theories. Letting the reader come to their own conclusions without forcing unverified facts at them to blindly believe. So many researchers out there publish theories as absolute fact, which I think is wrong.

I am often ridiculed for my theories, but I go in search of evidence to support them. I have always kept an open mind on any phenomena and tell other people to do the same. I always say. “This is my theory on [whatever subject], what do you think”.

Do you feel the Cryptozoological ﬁeld is heading on the right track or could things be done better or differently to aid its progression?

In Australia relict hominology and Cryptozoology are unfortunately largely in the hands of the idiot fringe just described, but there are, apart from Heather and I, good people who think as we do, and want to get rid of the sensationalising, media-hunting element. We prefer to conduct our research in as scientific a manner as possible. Only this will ever win the approval, and at least open-minded respect of the university fraternity. No-one can say that I have not carried out my research and gathered evidence in a sensible scientific manner. This is why the Gilroys have so much evidence and our critics none.

You’ve been to New Zealand a few times in search of everything from the Moa, mysterious lake beasts and our own version of Bigfoot, the Moehau. What would you consider  your best or favourite piece of cryptid evidence gathered from New Zealand?

At 71, I am still actively pursuing all these ﬁelds of research that I love. The word ‘retire’ is not part of my vocabulary. My favourite piece of cryptid evidence from New Zealand? The list is quite long. I have uncovered crude ‘dawn tools’ or eoliths of Homo erectus form North and South Island Pleistocene sites dating back 400,000 to 555,000 years BP [Before Present]. Footprint casts of the Moehau match Yowie examples. And both match fossil footprint impressions left by Homo erectus in Australia. Homo erectus, our immediate ancestor, walked into NZ from Australia over a former land-shelf that once joined Australia and New Guinea to New Zealand, itself part of the former Asia-Australia land-shelf which was covered by rising oceans 15,000 years ago, and of which only islands remain. I also possess three skull-types of pre-Polynesian origin dating back 500,000 years or more. Aside from hominin evidence, I possess a 2 million year old mineralised moa skull, and casts of Moa tracks. I treasure these relics for they were found by me in my favourite country beyond Australia.

You’ve built up quite an impressive back catalog of written books on everything from UFOs, to Yowies to ancient civilisations. Any new publications on the horizon?

I’m planning books on our New Zealand searches. Meanwhile I have published quite a number of books so far, and
recently completed my memoirs. Our next job is to put a book on the Hawkesbury River Monster on disc, get it to the printers and out on sale. I have three other books on the Yowie, a book on the Thylacine, the Moa, three UFO books among others to be put on disc and off to the printers in due course. I also have three books on the Uru Civilisation and another of mediaeval European exploration of the Australia-New Zealand-Paciﬁc region to publish. And on it goes… This year is proving to be a big one for discoveries. I have just uncovered fresh Yowie footprint evidence in the Kanangra wilderness and since January have uncovered pygmy fossil skulls dating back around 1 million years.

This man is a living legend. Passionate, unstoppable and perhaps a tad eccentric. But eccentric in that confusing, but incredibly intriguing and fascinating way. I’d love to spend time in this guy’s head for a few hours. I’m sure it would be an incredible journey! I look forward to reading and hearing about further adventures with this seasoned and time tested Yowie explorer, Rex Gilroy.

This article was republished from Paracon Magazine 2015. Click here for a copy of the original article. 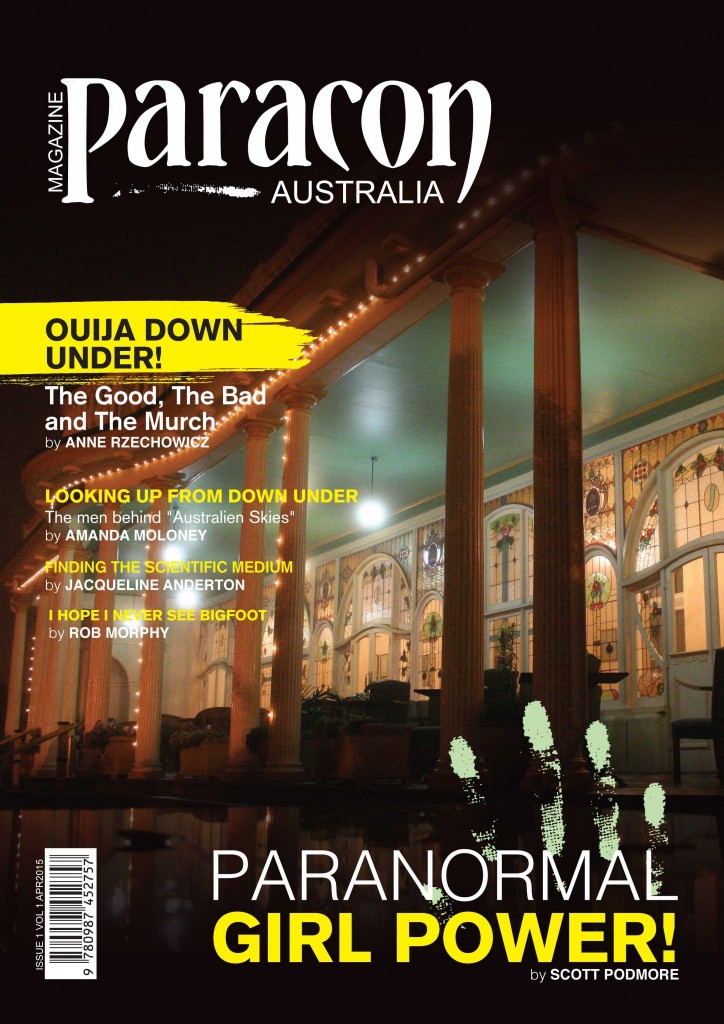