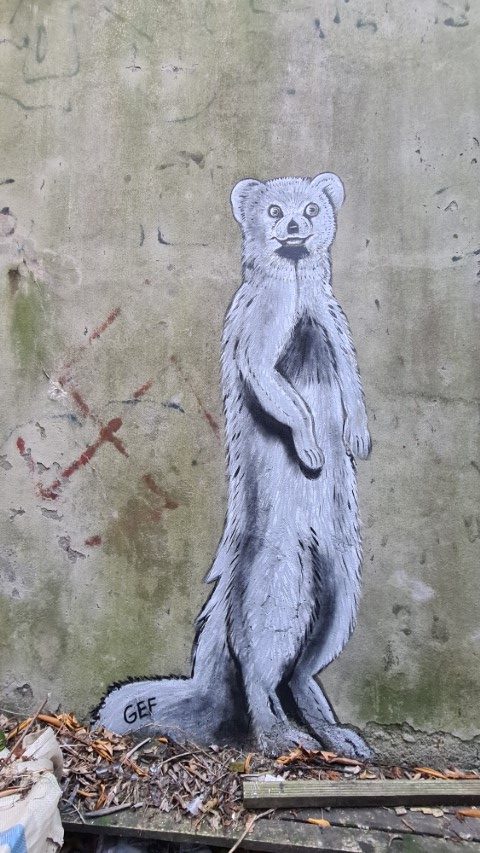 Recently, whilst travelling down South I went on a bit of a mission to try and find a little known about, secretly hidden and covertly painted piece of graffiti art in Dunedin.

It is a painting by prolific local artist Bruce Mahalski.

The painting depicts a mysterious character that existed back in the 1930s, simply called Gef.

Gef, also referred to as the Talking Mongoose or the Dalby Spook, was the name given to an allegedly talking mongoose which was claimed to inhabit a farmhouse owned by the Irving family. The Irvings’ farm was located at Cashen’s Gap on the Isle of Man. The story was given extensive coverage by the tabloid press in Britain at the time. The Irvings’ claims gained the attention of parapsychologists and ghost hunters, such as Harry Price, Hereward Carrington, and Nandor Fodor. Some investigators of the era as well as contemporary critics have concluded that the 13-year-old daughter, Voirrey Irving used ventriloquism and family collusion to perpetuate a hoax.

In July 1935 the editor of The Listener, Richard S. Lambert (known as “Rex”), and his friend, paranormal investigator Harry Price, went to the Isle of Man to investigate the case and produced the book The Haunting of Cashen’s Gap (1936). They avoided saying that they believed the story but were careful to report it objectively. The book reports how a hair from the alleged mongoose was sent to Julian Huxley, who then sent it to naturalist F. Martin Duncan, who identified it as a dog hair. Price suspected the hair belonged to the Irvings’ sheepdog, Mona.

Price asked Reginald Pocock of the Natural History Museum to evaluate pawprints allegedly made by Gef in plasticene together with an impression of his supposed tooth marks. Pocock could not match them to any known animal, though he conceded that one of them might have been “conceivably made by a dog”. He did state that none of the markings had been made by a mongoose. The diaries of James Irving, along with reports about the case, are in Harry Price’s archives in the Senate House Library, University of London.

Price visited the Irvings and observed double walls of wooden panelling covering the interior rooms of the old stone farmhouse which featured considerable interior air space between stone and wood walls that “makes the whole house one great speaking-tube, with walls like soundingboards. By speaking into one of the many apertures in the panels, it should be possible to convey the voice to various parts of the house.” According to Richard Wiseman “Price and Lambert were less than enthusiastic about the case, concluding that only the most credulous of individuals would be impressed with the evidence for Gef.”

Nandor Fodor, Research Officer for the International Institute for Psychical Research, stayed at the Irvings’ house for a week without seeing or hearing Gef. Fodor did not believe deliberate deception had occurred and moulded a complex psychological theory to explain Gef based on “a split-off part” of Jim Irving’s personality.