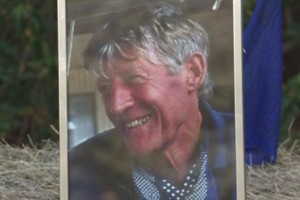 Friends and family have farewelled the publican and mountaineer who sparked an international media sensation when he reported a moa sighting near Arthurs pass.

Paddy Freaney died of cancer, and several hundred mourners made their way to his mountain home for a service with, not surprisingly, some unusual twists.

There was nothing ordinary about Paddy Freaney’s life and his funeral was no different, a horse-drawn cart carrying the casket from his home across the road to his old pub, with the mountains he loved as a backdrop.

The Irish-born Mr Freaney, a former SAS soldier, had climbed most of the peaks in the area, and one summer he and a companion climbed all 31 New Zealand  peaks over 3000 metres high.

Many mourners were outdoors enthusiasts he had encouraged or climbed with.

To the public, he was known for a spectacular claim of a moa sighting near Arthurs Pass in 1993 – at the time he ran the Bealey Hotel, located nearby.

The news that the extinct bird might still exist went round the world and Mr Freaney stood his ground  in spite of scepticism from scientists.

“I think it’s as likely to be an image of a four-footed animal like a deer, as is it is to be a bird,” said scientist Dr Richard Holdaway at the time.

But the determined Mr Freaney was far more than just a moa man, after marrying fellow adventurer Rochelle Rafferty the pair embarked on some of the most challenging climbing expeditions here and around the world.

“He lived his life to the full,” says his wife Rochelle Rafferty.

“He didn’t count the years in his life but his life in his years, [he was] a truly inspirational character,” she says.

“What can you say, he was a legend – moas and all,” says Mr Watson.

In true Irish style Mr Freaney was taken back to the pub he had resurrected where mourners celebrated his life in exactly the way he wanted.