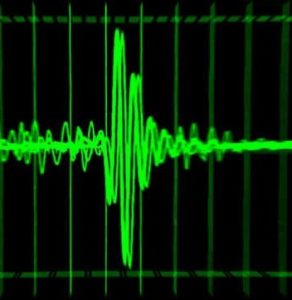 For as long as I have had an interest in the paranormal I can remember an association with Electronic Voice Phenomena (EVP). Even years back when I remember some friends trying out some EVP work with a cassette recorder. They sat there in a circle, with some atmospheric candle light asking out into the semi-darkness. Then after a short while they would rewind the tape and listen, most of the time the result was pure static, but now and then a few oddities would pop up!
Since those early days, things have moved along a little more and its had a bit more high tech spin applied to it. With investigators using handheld digital voice recorders during investigations and then analysing the recording on computers after the investigation to find anomalies. However, the human ear is still the tool of choice for finding voices or sounds amongst the static.
With EVP featuring on many paranormal TV shows now and almost always popping up as evidence for an investigation team, I find myself constantly questioning the integrity of this source of evidence. Hands in the air, on many occasions I have jumped up with excitement because I thought I had something paranormal on a recording. You have to ask yourself though, how certain am I that there is no other source for this? I have also watched many paranormal investigation TV shows where they have pointed out a captured voice, but alas I was unable to hear the voice let alone what they thought it might say!
my question is quite simple, as an investigation tool or piece of evidence, how reliable is EVP to our cause?

So, what is EVP? The phenomena itself is described as being electronically captured sounds that may resemble speech. However, these are not intentional voice recordings. It is the belief of some people that these sounds are in fact paranormal! There are others that believe they may have a more natural explanation though. Such as apophenia (finding significance in insignificant phenomena), auditory pareidolia (interpreting random sounds as voices in their own language), equipment artefacts, and simple hoaxes.
So, as ever what can seem a simple method to find evidence of the paranormal can be explained, apparently! There always seems to be good arguments on both sides of the fence right? To be fair this is something we should all consider though whilst investigating. When analysing our recordings we need to ensure what we are hearing would not easily be disproved. Surely that could mean that searching for possibly disembodied voices or strange noises, which in general appear hard to hear initially is out! Leaving the more significant unexplainable sounds we hear easily.
Method is important ! I watched a programme about a demonologist in the States a while back, who recorded many EVP’s during some of his sessions. The programme took one such recording and had it looked at by an audio expert! That’s not someone from Radioshack or Maplins, a real professor of the field. Obviously it would help if I could remember who, but I can’t sorry! Anyways, basically the Professor discovered that the recording device cleverly automatically amplified when it wasn’t picking up any sound. It was one of these voice recorders which has voice activation built in. Oddly enough it was during these amplifications that the demonologist guy thought he had caught an EVP! An EVP by the way which I couldn’t really hear or associate with what the guy thought it said! The point is, this left me perplexed ! I already had come to the decision, when analysing our digital recordings I would only pull out something significant. However, I was now questioning the equipment I had too!

Something we tried recently was a little EVP experiment, which was a little more controlled than a few members of the team in a room asking questions. Farsight PRS Team member Jim Bridgeman, devised the experiment which we trialled at a recent investigation. I also hope to run it again in our next investigation in a few weeks. Basically, we placed a digital voice recorder in a room, then we kicked off a recording of Jim asking various questions which referred directly to the location. Between each question a gap was left for a few seconds, perhaps for the spirits to answer. Although on this particular occasion they were not too talkative! Jim also repeated the same questions, but this time filled the gap with white noise. We left this running for an entire vigil, which was about 45 minutes. At least we know that noise from the team can be ruled out, which leaves an empty quite room. That way if anything is heard, not specifically voices, but other significant sounds too, then we know something odd was occurring. Especially as the area was locked off! Like I said on this occasion we didn’t manage to obtain a positive result, but it still requires further trials I think.

I’m not going to stop using the EVP method, as I believe audio recording can assist in numerous ways, but I do now look at it slightly more sceptically!
Finally, I would like to hear about your experiences with EVP? Have you managed to capture any oddities which are obvious and have no true explanation? Perhaps you feel similar to me! Don’t get me wrong I am not putting EVP or its methods down, just trying to find a way it could be used as more significant evidence.

Ashley Knibb is a Paranormal Explorer, Investigator & Researcher. He writes about his experiences whist investigating the paranormal as well as theories and discussion on paranormal techniques.
View all posts by Ashley Knibb →