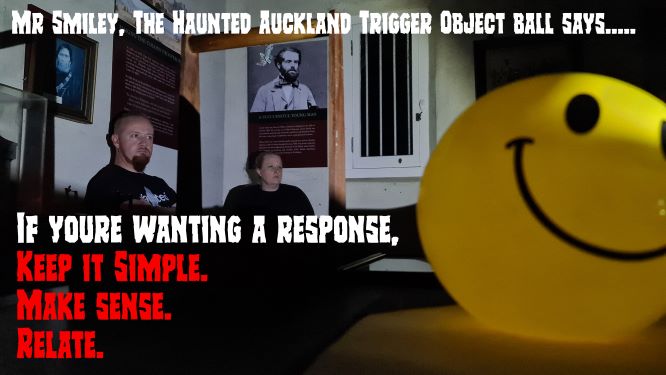 Here’s a helpful tip from us to you.

If you’re trying to elicit a response from an alleged spirit resident, we suggest you follow these three simple rules.

Keep it simple – Too many teams and investigators will rattle off a barrage of commands, questions and requests, and after a ten second wait will wonder why they aren’t receiving any replies.

Firstly, ask yourself. Have you delivered your requests in a vocally clear and understandable manner?

Did you speak in a respectful, non-confrontational, non-condescending tone?

Did you speak in their language? (Note: Not all ghosts are English speakers)

How many T.V shows and You Tube videos have you seen investigators shouting out questions in English, in a 1000 year old castle in Europe somewhere.

Now, tell me…. How the heck is a possibly 100 year old (or older) spirit of a deceased person going to understand any of that? None of these gadgets were around when they were alive.

I’m betting there are many people reading this right now that have no idea what a ‘’K2’’ is.

(It’s a K2 Meter, a cheap and very unreliable, but popular electro-magnetic (EMF) Field Meter that many teams use for investigating, by the way)

When investigating, keep in mind that there’s a very good chance that the ghost, or ghosts you may be trying to communicate with, are VERY ‘’Old-School’’. So, keep the conversation simple, keep it relatable to their situation, their era and what they might know. Don’t talk in riddles, jargon and urban slang. Put yourself in their shoes and treat them as you’d want to be treated in their position.

One more thing… I’ve always thought it was a bit disrespectful or even hurtful to ask…’’When did you die?’’ Ever think that maybe they don’t know their dead?

While on the subject…. How do WE even know they’re dead? We’re really just assuming these things and there’s no way of really knowing for sure. Maybe WE are the ghosts and THEY’RE alive? Seen The Sixth Sense?

Ponder a little on all this. Let’s see if we can better the way we conduct communication sessions. Maybe, just maybe, we’ll get the responses we’ve been asking for. Maybe……