We have a room here full of items passed on to us by people In similar situations. I’ve adopted quite a few haunted or cursed items through the years. A lot of dolls too. ( a bit weird for a 53-year-old guy I reckon) but I just feel it needs to be done, instead of destroying them.
In theory, whatever has attached to them was quite possibly a person at some point; with feelings, a family, and a history. It just feels wrong to me to cast them away or destroy them.
Because of my chosen field of study, I feel a responsibility to look after and preserve the memory of these items, good or bad.

One of the more recent acquisitions to the haunted object research room is a Crying Boy painting which I collected from a house down in Dunedin. The painting seems to be the source of much trauma and upset to this family; especially the daughter who has been in contact with me for about two years now. She is doing her best to cope in such a situation, but understandably it certainly can’t be easy.
We have stayed in contact as I was unable to travel due to lockdowns and restrictions. I did visit the house briefly the previous year but was unable to do any thorough investigation. However, one of the items of concern was left out for me to collect.
On Queen’s Birthday weekend, June 2022, members of my Haunted Auckland team; Sam, Barbara and myself, flew down to Dunedin to investigate a couple of locations. We also visited the home to properly document the surroundings and prepare the painting for removal.
The house we are told is around 140 years old.
It had been a quiet and ordinary family dwelling, up until the painting was brought into the home.
I have promised to keep all names, addresses and personal information private, though I am detailing as much as I can in order to document this case for my own research files.
The copy I am publishing here has been heavily edited to omit any personal information.
Soon after the painting was brought into the home and hung on the father’s bedroom wall, the family dynamic and general mood started to change.
Family members were soon afflicted by an unusual skin infection.
An inflamed dermatitis/eczema-like rash in parts of their bodies.
Tragically, soon after, both parents died 2 weeks apart.
The mother was rendered unable to breathe and the father suddenly bled to death in the bathroom.
Since their passing, the daughter has stayed in the house only once and in that time reported experiencing further, this time more physical activity, that may or may not be attributed to the painting.
Family members had also experienced unusual activity during that time. The family dog started acting unusually. ”He kept freaking out and looking at the ceiling and then busting down the doors to get away from whatever he was seeing”
One month after the father passed away, an ornamental bottle sitting on a cabinet shelf flew across the room and shattered into ”a thousand pieces”.
A wall clock also ”threw” itself across the room in the middle of the night and struck a rather realistic-looking animatronic toy cat, in a basket. The cat is a wind-up item, covered in real fur and when wound up, gives off a purring sound as its stomach rises and falls, to mimic sleeping. The cat had been broken many years prior and hasn’t worked for well over twelve years. Until that moment.
The clock struck the cat, which started ”breathing and purring” out loud.
I brought the cat home with me the first time I visited the home a year previous.
The daughter told me she didn’t know what to do and was keen to destroy the painting and see it gone from the house for good, but she decided this wouldn’t be a wise thing to do.
According to those I consulted, (more experienced and knowledgeable in this type of situation than I am) destroying the item would be counterproductive and pointless and does nothing, as the apparently negative attachment would just move on to something or someone else. Whether or not there is any truth to this theory, I wasn’t in any position to doubt or discard the information offered to me.
I’m not really a believer in the concept of spirit attachments, but sometimes when matters are as emotionally sensitive as this one was, you have to leave the scepticism out and tread lightly, with a compassionate and open mind.
Everyone in the family who had been in contact with the painting since the Mother and Father’s passing was soon affected. A noticeable change in mood, personality, and general demeanor, has created much conflict and division.
Possibly an unfortunate coincidence, an Uncle and Auntie helping with cleaning out the house, mainly the Father’s room, also succumbed to great misfortune. The Aunty’s brother passed away and the Uncle developed cancer. The family again felt it was due to the alleged curse of the painting, so refused to enter the room ever again.
When we arrived at the house the Father’s room had been left untouched, except for the removal of his bed and all personal belongings, leaving a few remaining pieces of furniture. A wardrobe, a dresser, and the Crying Boy painting, still in place on the wall.
The Crying Boy painting now resides in our research archive. A monitored room dedicated to the re-homing of allegedly haunted or cursed items that we have ”adopted”, to relieve families living in fear.
We will be staying in contact with the daughter to follow up on whether there has been any change since the painting’s removal and document anything that may occur while in its new home.
Here is a photo of the Crying Boy painting in its previous position.
For further information on the history of the Crying Boy curse, follow this link to an article on our website. https://hauntedauckland.com/site/the-crying-boy-paintings/ 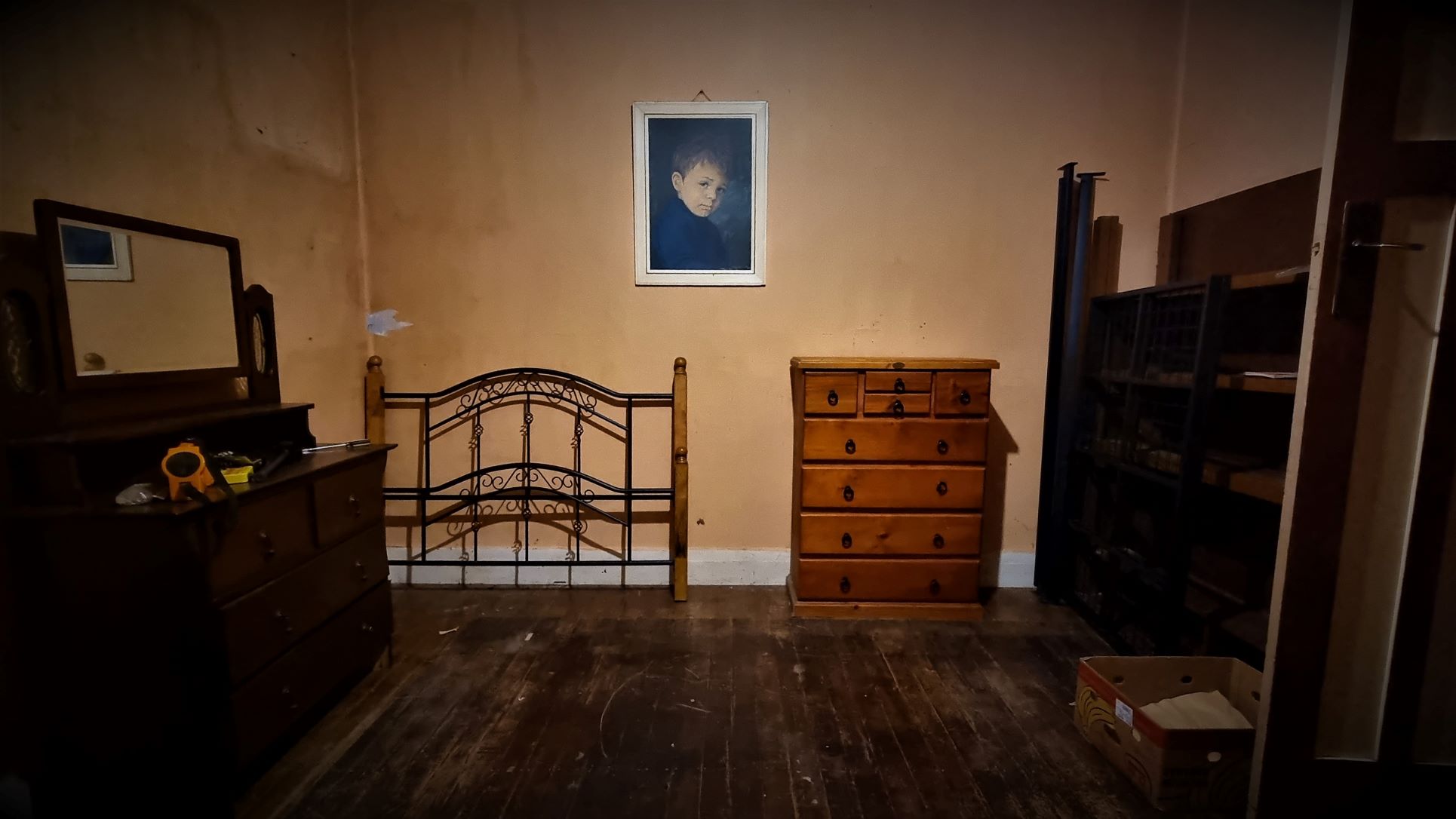