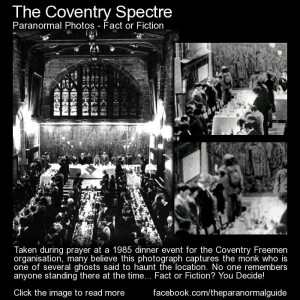 January 22nd, 1985 – the Coventry Freemen organisation and their guests stand in prayer during a dinner event. All the guests are still and as it was a dark room so the photographer probably thought it would be the perfect time to allow for a longer than usual exposure to get enough light into the picture.

Nothing was though out of the ordinary at the time but as people started to see the print of the picture a mystery surfaced. Who was the robed figure standing near the end of one of the tables?

No one had dressed up for the event, no one remembers anyone standing there as they stood for prayer. The figure also seems to be taking part in the prayer, head slightly bowed, hands clasped in front.

St Mary’s Guildhall, Coventry, Warwickshire, is where the event was hosted. It has many legends of ghosts and paranormal goings on – apparitions of a grey lady, a girl in a blue dress, strange lights and a monk. Could this photo have captured one of these ghosts.

This photo is often included as one of the top ten best ghost photos but some people disagree, maybe it is two people standing close together, their features merging on the film during the long exposure?

What do you think?
Does this photo show some the ghost monk that has been reported about the location?
Or is it somehow a light anomaly?
Or do you think it is a set up, a complete fake?
Something else entirely?
Fact or Fiction, you decide!