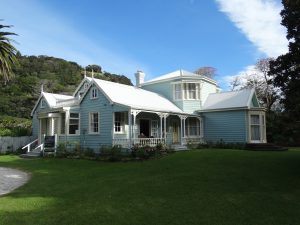 It is fully furnished but in a mix of styles reflecting the eras and preoccupations of some notable past owners.

Who lived here?
• An early entrepreneur extraordinaire
• An Indian Army Major and his artist wife
• A wealthy widow with a social conscience
• An eccentric sea captain
• A customs agent and avid collector

• Robert Graham (1820-1885) was a tourism entrepreneur, farmer, businessman and national and local politician. The homestead he built in 1857 has been shifted, extended and renovated to become the Couldrey House you see today.

• Major John Whitney founded the Colonial Ammunition Co. in 1885. Mrs Harriet Whitney was a talented artist. The Whitneys lived here for 20 years – the first permanent residents – they doubled the size of the house, where they entertained generously.

• Mrs Annabelle McKail Geddes and her family enjoyed Wenderholm as a holiday retreat from her busy philanthropic life in Auckland.

• Captain Thomas Caradoc Kerry (1859-1944) was a sea-captain with charm and a colourful past. In later life (his Wenderholm years) he was simply a recluse.

• H.W. ‘Tim’ Couldrey was a shipping agent and enthusiastic collector. He and his wife Brenda Edmonds Couldrey restored the house from near dereliction (1956-60), added some of the comforts and conveniences and hosted many V I P’s. The Couldreys owned Wenderholm for 30 years and were the last private owners of the house.

There are stories of ‘Pale, misty looking’ men and women seen momentarily before disappearing, at various times around the property and within the home.

One report describes a shadowy figure seen briefly at the top of the stairs.