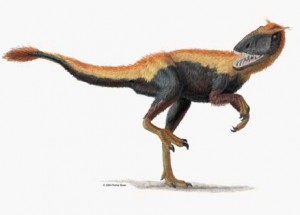 The Burrunjor is an Australian dinosaur cryptid that resembles the theropod dinosaur T. rex, or maybe a neovenatorid allosaur like Australovenator, Megaraptor, or Rapator.

The Burrunjor is described as being a giant lizard according to aboriginal mythology. Based on sightings it is 25 feet long and has small clawed hands and walks on two bipedal legs.

Through the 1950s, Australian cattle ranchers have reported a large creature leaving bipedal tracks was eating their livestock. Also, earlier aboriginal accounts suggest that is it a reptilian animal (possibly with feathers) that ate kangaroos and other large animals.

If it weren’t for the bipedal footprint sightings, the burrunjor could also be a Megalania, a prehistoric giant monitor lizard that lived in the area more recently, base on the aboriginal description.