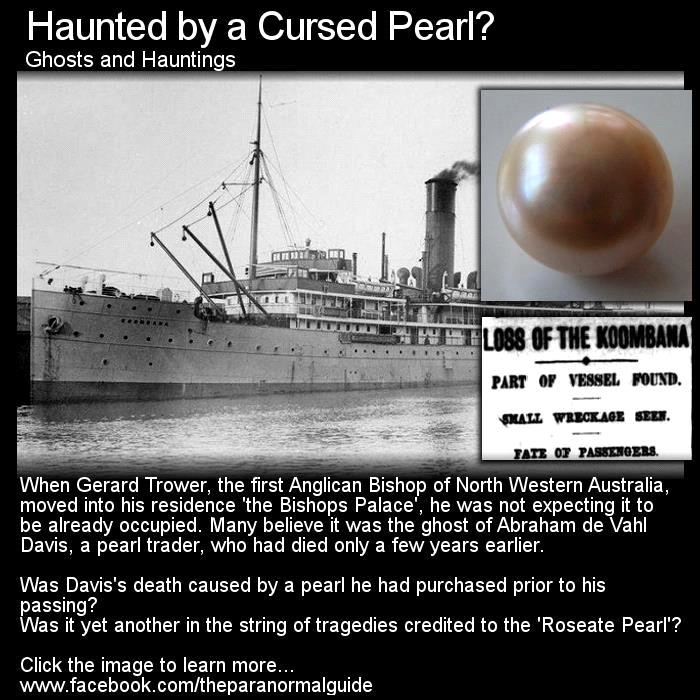 When the first Anglican Bishop of North Western Australia, Gerard Trower, moved into his new residence the ‘Bishops Palace’, he was not expecting it to be already occupied. One night Bishop Trower awoke to find a ghostly figure illuminating his bedroom. Although Bishop Trower described the figure as dressed in the garments of a Rabbi, many others who have seen the spectre describe it as looking more like an affluent gentleman.

Who was the mysterious figure haunting the bishops residence?

The answer many give is that the ghost is of a man who used to live in the house. His name was Abraham de Vahl Davis and he died in Australia’s worst civilian maritime disaster, only a few years beforehand.

Not quite, for the tale of Abraham Davis’ death is one surrounded by mystery, murder, suicide and the curse of a pearl, that might not have even existed…

The gem in question is the “Roseate Pearl”, known for its magnificent size and beauty. The early history of the pearl is a little hard to trace, but suffice to say that where treasure moves, tragedy follows!

The following is an excerpt from the book “Coast to Coast: The Great Australian Coastal Liners”:

After this early snippet of history, we can start to follow the Roseate Curse through the newspapers of the day.

In 1905, the body of a man was found face-down in the ocean near Chinatown, Broome. On investigation, it was found that he had died from blows to the head and subsequently drowned. He had a large sum of money on him, and was soon identified as Mark Liebglid – a well known pearl dealer. Before long three men, Hagens, Espada and Marquez, were arrested for the crime and the story of what had taken place that night came to light.

The men had lured Liebglid to a boat offshore under the pretence of selling him a valuable pearl. When Liebglid was aboard the vessel, one of the men struck him in the head with a slingshot and Liebglid went overboard. As he could not swim, Liebglid held to the side of the boat crying out “Help, Police they are murdering me. I am done!” The men in the boat endeavoured to drown Liebglid, one jumping over board to push him under while the other two battered him about the head to get him to let go. The three criminals were unable to drag the body into the boat, as people with lanterns appeared onshore. They left the body in the water and quickly made their getaway.

After the arrest and trial the three were sentenced to hang in Fremantle Gaol. The first to the Gallows was Hagen, who always maintained his innocence till the last. His final words lasted a quarter of an hour and stated his innocence before he went through the trap door. Hagens Death was instantaneous.

Marquez and Espada were hanged together. Their final words (which were difficult to understand, as they were in broken English) were taken as an apology and admission of guilt. When the hood was drawn over their heads Espada cried ‘Oh, let me see’ and the hood was raised. Espada and Marquez then proceeded to have sharp words and argue with one another. Marquez made a grab for the rope over his head, and in the confusion, the hangman began to cry like a child.

As all of this was happening, the Chief Warder stepped forward to try to stop Espada’s struggles, but unfortunately this was the moment that the executioner chose to pull the lever, opening the trap door. The three men fell into the twelve foot deep pit, two stopping abruptly before the bottom by the noose around their necks and the Chief Warder, a man in his mid-fifties, hitting the floor head first.

No one is quite sure what happened to the pearl directly following the murder of Mark Liebglid. It was supposedly in the possession of a Philippine man who, living in an almost destitute state, sold it to man named Gomez. The Philippine used the money to travel home, but died as soon as he set foot on his native soil. Gomez soon had the pearl stolen from him and committed suicide out of despair.

It is here that we finally arrive at Abraham de Vahl Davis, who purchased the Roseate Pearl for twenty thousand pounds, at Port Hedland Western Australia. Davis was set to travel aboard the SS Koombana, to make his way home to Broome.

On the morning of 20th March 1912 the Koombana, followed by SS Bullarra, set-off but soon had to change course due to a heavy North Easterly gale. The two ships became separated before ‘A Howling Hurricane’ tore through the ocean. The Bullarra made it back to Port Hedland after the cyclone had past directly over her, but she was not unscathed, losing her smokestack. Several other ships were beached and wrecked but the Koombana was never seen again. To this day, all that has ever been found of the SS Koombana is a piece of planking, a state room door, some air tanks and a few other pieces of panelling.

All 157 on board, including those labelled as ‘a Japanese’, ‘a aboriginal’ and ‘Malay prisoners,’ perished in what has been called ‘Australia’s Titanic’. It is the worst civilian maritime disaster in Australia’s history. It is supposed that the pearl was lost to the depths, its curse unable to take another life.

There are those who say the Roseate Pearl never existed, and is just a fantastic urban legend. There may have been one way to find out; to ask the ghost of Abraham Davis who haunted the Bishops Palace! Unfortunately the building was demolished in 1980.

Ashley Hall 2010. All reference material can be made available on request.

(Photo SS Koombana circa 1910 by Allen C. Green now in the public domain)

For more information about all things paranormal, strange and macabre through articles, discussion, podcasts, videos and competitions visit The Paranormal Guide: