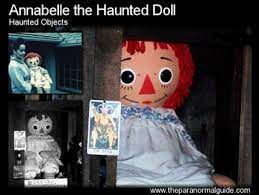 Annabelle is not your run-of-the-mill haunted doll, but rather a tool for a much darker purpose. Dark entities can be quite cunning and manipulative in getting what they want, and in the case of Annabelle, two nursing students came very close to losing a friend…

In  the 1970s a terrible event took place in a small apartment, lived in by two nursing students. For quite some time strange goings-on were noticed by the students, which included strange handwritten messages on paper, objects moving around the house and strange dreams had by all who stayed the night. It would all culminate when a friend was attacked with bloody and burned claw marks, torn into their chest.   The culprit? A Raggedy Anne Doll named Annabelle, who was thought to be possessed by a demon and taking on the guise of the ghost of a little girl… It all began when Donna, a nursing student, was given a  Raggedy Anne doll as a birthday gift from her mother. Raggedy Anne (and  Andy) Dolls were quite popular in the 1960’s/70’s, and the graduate student very much liked this gift. The doll was placed on her bed as a decoration, and not much more was thought on the matter by Donna or her roommate Angie.   However, the girls soon began to find the doll creepy – something was not quite right about it. It sat on the bed in Donna’s bedroom, but the girls felt as if they were being watched. Over time these strange  feelings would develop into fear, as the doll took on a life of its own. 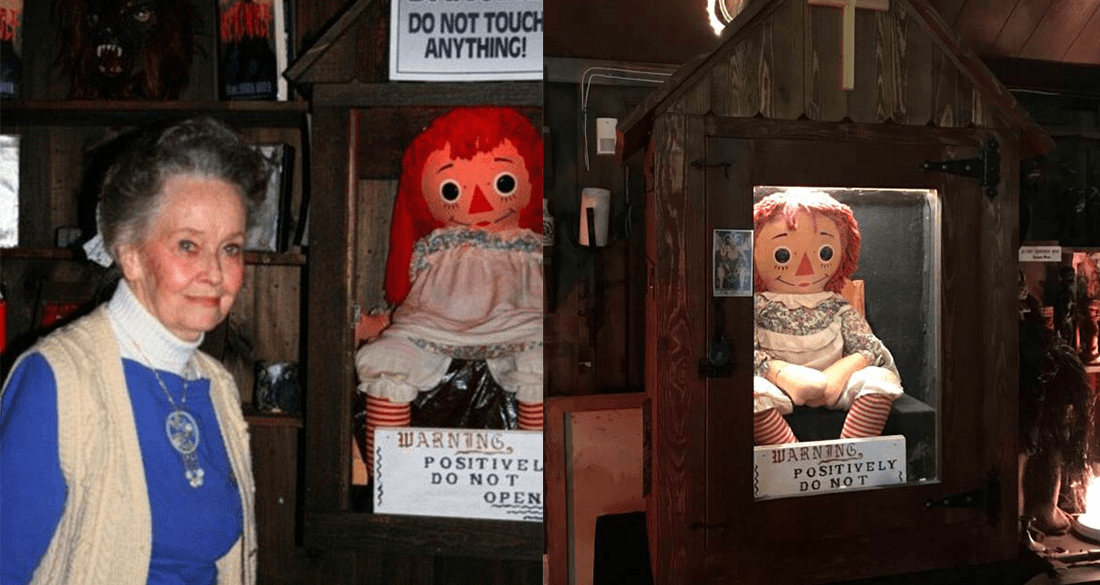 Annabelle took on a life of her own…

It  began with the doll seemingly moving about the house on its own. The  room-mates would come home and find the doll in the most unexpected of  places. At first, its pose on the bed had changed, but soon the doll  would be found throughout the house. Much of the time the girls  would arrive home to find it sitting cross legged on the couch, a place  where the girls would spend much of their time. Donna thought the  room-mate may have been joking, so in the morning, before classes, she  took the doll off her bed and placed it on the couch. However, she came  home before her room-mate and found the doll back on her bed.   The strangest and most inexplicable way the doll was found was standing  upright and leaning against a chair. This very much startled the girls,  and they knew something was definitely up, as the dolls legs were too  flexible to support its own weight. About a month after receiving the doll and dealing with it moving about the apartment, a new phenomena began.   Donna and Angie would arrive home to not only find the doll moved  again, but also pieces of parchment containing short messages written in  a seemingly childlike hand. The messages would say things like “Help”,  “Help Us” and “Help Lou”. Enough was enough! Not only were the  messages creepy, but the girls could not find a source for the paper, as  neither kept parchment paper in the house! Donna sought out  the help of a medium, who soon made contact with the spirit of a young  girl named Annabelle Higgins. Annabelle used to live in a house near to  the land where the apartment complex was built. Annabelle was only seven  when her body was found on the field where Donna’s apartment stood.   Annabelle, in spirit, had been staying in the complex for many years,  but when Donna and Angie had moved in, she liked the girls and found the  doll suitable for habitation and manipulation of the surroundings. Donna gave Annabelle permission to stay with them, as long as she stopped doing things that scared them.   Donna, Angie and the medium seemed happy with the arrangement, but  their friend Lou did not like what was happening. Lou felt that the doll  was evil and should be gotten rid of. When he stayed in the apartment,  he would have very vivid dreams about Annabelle attacking him.

One  evening Lou and Angie were sitting on a lounge, reading over maps in  preparation for a road trip the following day. They were startled by  rustling sounds coming from Donna’s room. Fearing it was a burglar; Lou  quietly crept up to the bedroom door then suddenly rushed in to confront  the intruder. No one was there except, once again, Annabelle  had moved. This time she was sprawled out on the floor, the feeling of  life having left her. Lou walked up to the doll to inspect it, then got  the distinct impression that someone was standing behind him. He turned,  expecting to see Angie, but was rather surprised by a burning sensation  in his chest. Lou fled the room to the safety of the living  room where he removed his shirt. To his and Angie’s amazement seven  distinct claw marks were found burned and bleeding in his chest, three  were vertical and four were horizontal. The wounds slowly beaded blood,  but the burning was more pronounced. Something unseen had definitely attacked him.   Donna now believed the doll to be possessed by an evil entity, and once  again sought help. Help arrived in the form of Ed and Lorraine Warren  who had worked on many cases concerning dark/negative spirits, including  the Amityville Case. It was soon decided that the doll was not  possessed, but was rather being used to give the impression that it was  possessed. The entity in this case was not capable of possessing the  doll as it needed a human host, and since this can take time to succeed,  the doll was used to fool the girls into believing that it was a much  more friendly spirit. Essentially, in their minds a ‘demon’ had  attached itself to the doll, but wanted so much more and through the  previous séance, Donna had unwittingly given it free reign of the house  when she gave it permission to stay. It seemed that the intent  was to possess Lou with the doll, trying to get his attention and  possible sympathies through the hand written notes, many of which had  Lou’s name on them. The dreams, scratches and burns typical of the early  stages of the demon making its mark and intent to reside within a human form 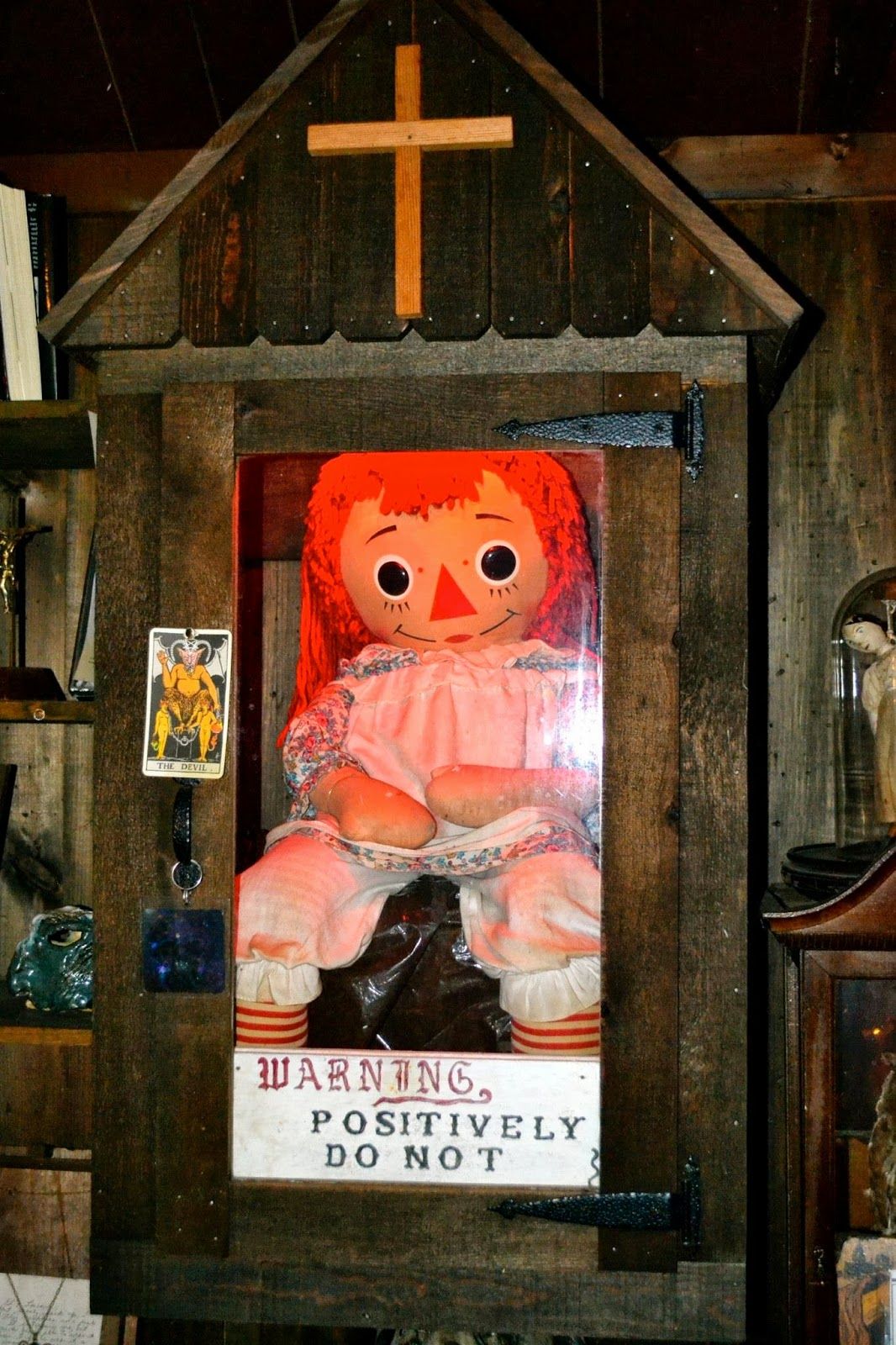 An exorcism was performed on the apartment, and the   Warrens took the doll with them. Donna, Angie and Lou were now free of   the terrors that had plagued them for the last few months.   As  for Annabelle the Doll, she sits locked in a glass case in the  Warren  Occult Museum, Monroe, Connecticut, together with a sign that  says  ‘Warning. Positively Do Not Open’.

The presence can still be felt  within  the doll, by those with sensitive abilities, but as for why the  entity  stays attached with the doll? It  is not entirely certain, but  maybe it is looking for the right person  to pay a visit to the museum in  which to make a new attachment…