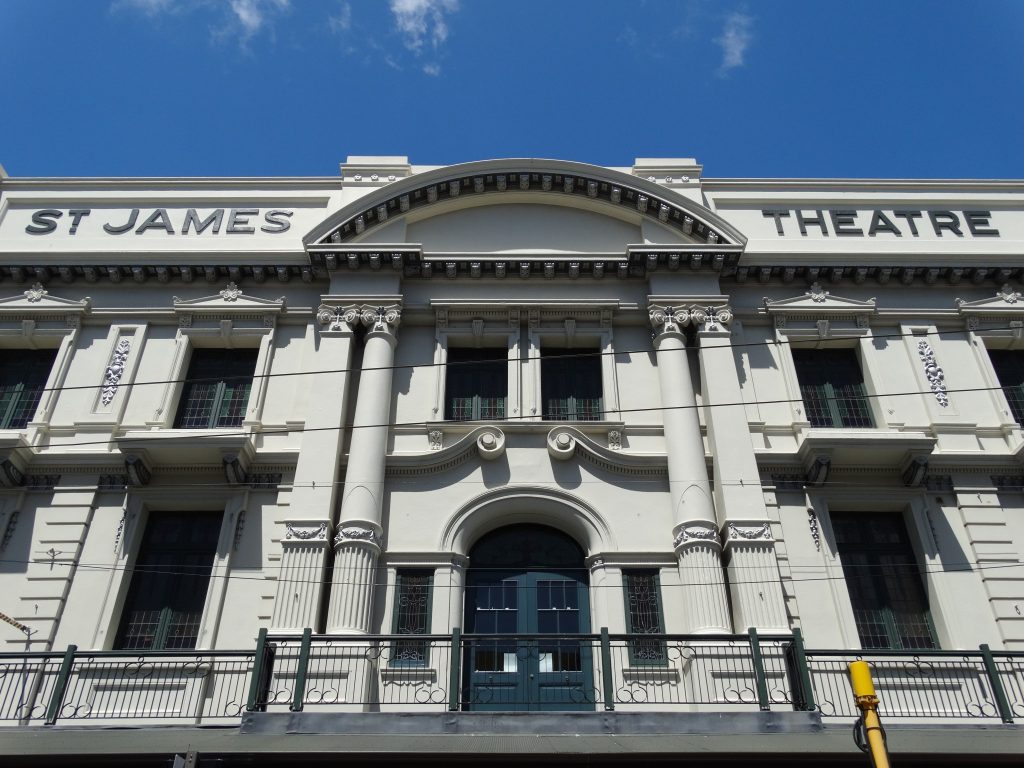 There are numerous ghosts reported to haunt this beautifully kept and much loved, iconic theatre.

The St James Theatre was opened on Boxing Day, 1912.

During the theatre’s first months, it was used primarily to play silent movies, but was later adapted to present live performances as well.

The St. James has had a long history, with its success in its early years, a near demolition in the 1980’s and to its return to the city’s cultural light in the late 1990’s.

One of the more regular sightings is the ghost of Yuri, a Russian performer who supposedly fell, or jumped from the fly-floor above the stage, to his death, although another claim is that he was pushed by another Russian performer, an actress named Pasha.

It is said that Yuri was infatuated with one of the dancers, who avoided his advances in favour of a theatre electrician. It is not known whether he committed suicide out of despair from rejection, was pushed, or simply fell accidentally.

Yuri has been encountered playing with the lights; in particular, switching them all back on again once the theatre has been locked up for the night. A theatre projectionist reckons Yuri has saved his life twice whilst working in the theatre.

While searching for the light switch one night when the lights suddenly went out in the auditorium, the man claims he was pushed backwards by what he believed was Yuri. When the lights turned back on, it was then he realised he was standing only inches from the deep orchestra pit, and if not pushed back, would’ve fallen in causing serious injury or even death. Another terrifying incident was when the man was standing on stage with his infant son. Suddenly, a beam overhead collapsed and fell. The projectionist was pushed backwards by an unseen force, with his son carried about 3 metres through the air. The man believes it was Yuri that saved them that evening.

There is also the ‘Wailing Woman’, a frequent apparition who is said to wail and moan in the dark of night. The story goes that the woman, a struggling actress, was booed off’stage one night. She took it hard and committed suicide that night, by slitting her wrists. it is thought that is it her ghost that causes many of the unfortunate accidents and mishaps around the theatre as vengeance. other actresses have suffered sprained ankles, falls from ladders and steps, and sudden colds and throat infections, rendering them unable to perform or sing properly, or at all.

Even prolific film maker, Peter Jackson has made claims of encountering the mysterious Wailing Woman, many years ago, standing at the foot of his bed in his apartment which was situated across from the St James Theatre.

The alleged ghost of Stan Andrews is also supposed to be residing within the theatre and is often heard wheezing as he lurks around the backstage corridors during performances.

An unknown tall, thin man, aged about thirty has been seen in the theatre numerous times outside of performance times.

Even more intriguing, though highly unlikely, is talk of an entire boys choir, also said to haunt the theatre. The current story regarding this, is that the choir played their last song at the St. James Theatre during Second World War, before heading off on tour by boat. No more was ever heard from the boys again, and the ship never reached its destination. Staff often hear their music emanating from up in the stands.