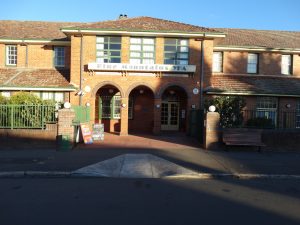 I stayed 6 days at the YHA Katoomba, whilst in Australia for the annual Paracon, Paranormal weekend event.

A relaxed stay with very friendly and helpful staff and a good steady flow of tourists and people passing through.

I had heard a few stories of spooky goings-on in this place, so made a point to book a specific, allegedly haunted room well in advance.

I stayed in Room 208, which also had the name ‘Jamison’. All rooms have names. Not sure who Jamison is / was referring to though.

There are stories of mysterious figures seen walking down the corridors. One staff member witnessed someone going into a room down a hallway whilst she was cleaning. Knowing there was no one staying in those rooms, she went to see if they were perhaps lost. The room was empty…the door was still locked. Whatever was seen had apparently walked through the door.

I have read reports of the oil heater in Room 208 turning itself on  and visitors staying alone in the dorm being touched by unseen hands.  Also, a figure has been seen walking down the corridor, then disappearing when reaching the end room. Lights are also said to turn on and off, by themselves.

On closer inspection, the oil heater in the room required an end dial knob to be tuned to start the heating process. The knob did not turn easily.  Smoothly, yes, but I could see that there was no way it could have turned itself around. It wasn’t loose and there is no spring or wires which might have caused some movement, turning the heater to the ”on” position.

I set up a small video camera aimed at the heater dial in the hopes of capturing some movement.  I also positioned a compact vibration sensor on top on the heater to highlight any potential movement.  I recorded 6 hours of footage.  End result, no movement.

However, during the nights I was there, numerous times I would  hear someone walking past my door and down the corridor. I would sometimes also hear a door closing in one of the rooms next to mine. On asking a staff member, I was told there was definitely no one in those rooms.

A lovely clean and well looked after hostel. Handy to everything Katoomba has to offer. Id definitely stay again.