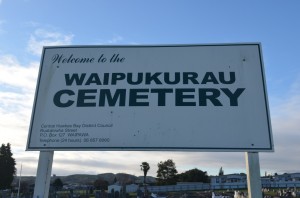 The Waipukurau Cemetery, which was situated on what was called Cemetery Road and is now on the corner of Porangahau Road and Lake View Road, was constructed in the late 1880’s, with the first recorded burial dated 1887. At this time, the public cemetery was situated out in the country, however over the years with the expansion of the town it has now become a part of the township.

Three times over the years the Waipukurau Cemetery has very nearly closed due to lack of space. Other land was investigated. In 1953 with the agreement of all the neighbouring Councils of the day, land at Hatuma was investigated to be used as a District wide Cemetery; however after a geotechnical report was done on the land it was discovered to be too wet to be use as a Cemetery. In the meantime, the Waipukurau Cemetery was kept open by purchasing small pieces of neighbouring property from the Waipukurau Racing Club.