A number of sod built cottages were built at Sodtown in the Waimate’s early days. The area became the site of Waimate Hospital. A cottage hospital was built on the site of former SOD TOWN in 1874-5. A larger building was erected in 1878. Dr Deane (from Blenheim) was appointed resident surgeon in December 1878.

The Waimate Hospital stands on sixteen acres of ground about a quarter of a mile outside the boundary of the borough, on the Waimate Gorge road. Ten acres of the land are freehold and six are held under a nominal rent from the Borough Council.

The hospital, which can accommodate forty patients, is built in brick and concrete; and, besides two wings which contain the main wards, it has a fever ward, and several small rooms for the accommodation of patients. The grounds near the hospital are tastefully laid out in gardens, in which there is a picturesque little building, which is used as a smoking and reading room for convalescent patients. Dr. Barclay is Medical Superintendent, and the hospital is connected by telephone with his surgery in Waimate. The working staff resides on the premises, and consists of the Matron, three nurses, a wardsman, a housemaid, a cook, a laundress, and a gardener.

Mrs Jane Chapman, Matron of the Waimate Hospital, was born in Melbourne, and received a home education at Merri Creek, Coburg, Victoria, where she was brought up. In 1863 she became the wife of the late Mr William George Chapman, of Merry [Merri] Creek. Mr. and Mrs Chapman were appointed Master and Matron of the Waimate Hospital in 1887 but six years later Mr. Chapman gave up his position owing to ill health, and was an invalid till the time of his death, in 1893. Mrs Chapman, however, has continued to act as Matron, and had full charge of the Hospital until 1893.

Its doors closed on September 30 and the last 14 patients moved to a new home in central Waimate, Lister Home, a 24 bed facility. In 1874 the Waimate Road Board recommended to the Superintendent of Canterbury the urgent need for a district hospital. A cottage hospital was built but this was unsatisfactory. After a public subscription amassed £2244 the hospital was built in 1879. The Hospital and Charitable Institutions Act of 1885 brought unease to Waimate. The control of the hospital was threatened. It set in motion what was to become an endless battle for separation. Waimate citizens did not want the South Canterbury Hospital Board to control their hospital. In 1909 the Government was preparing the New Hospital and Charitable Act Bill and an amendment to the bill was suggested, the fifth, was appended. It read, in part: “The South Canterbury Hospital Board shall keep open for the treatment of inpatients and outpatients at the hospital at Waimate and shall at all times efficiently maintain it to the satisfaction of the Director-General.”
During World War Two Major G.T. Hennessy, Waimate member of the South Canterbury Hospital Board, said New Zealand would have to cope with 30,000 sick or wounded men from the war. Waimate, he contended, must do its part. This set off a chain of events that led to work on a new ward block. In 1967 Oct. 17 the South Canterbury Hospital Board decided surgery at Waimate should be restricted to minor operations and causalities. In 1969 Pitts Ward, named after a Waimate doctor, Dr A.G. Pitts, was closed. In 1977 the hospital beds were reclassified to 40 long-stay geriatric and 24 medical and surgical. In 1982 the maternity ward was closed. In 1992 Waimate set up the Waimate Health Developments Trust and was successful in running the former nurses home as a stand-alone accommodation unit for individuals and groups. On 4 May 1993 the Fifth Schedule was repealed and with its going the future of Waimate Hospital. In 1995 the Waimate Hospital Marquette Ward closed. 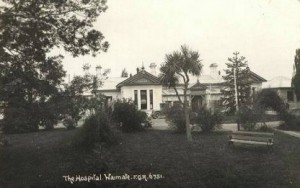 The disused Waimate Hospital has been sold to Ngai Tahu Property Group at its valuation of $65,000. South Canterbury District Health Board chief executive Craig Climo said the Minister of Health had confirmed the sale proceeds would go to the board on condition they were used for reinvestment in board facilities.

The board in February approved the sale, subject to the Crown disposal process being completed. Sale was on condition the property’s reserve status was revoked within three months.

The hospital had been left to deteriorate while negotiations over its ownership dragged on. Mr Owen said the place had been “trashed” by vandals. “But that is the reality of life when a place is deserted. I am a bit sad that it has been allowed to be trashed, though.” The hospital was in an excellent location and a lot of local residents wanted some sort of development on the site. “It is such an idyllic setting.” The hospital closed in 1995, and Waimate Health Developments offered services from the adjacent Hunter Hills Lodge.

Waimate Hospital is closed, but a tortured spirit dwells within.

The Christchurch Press wrote about the haunted hospital in 1996, saying locked doors were found open, the sound of breaking glass was reported but nothing found, and ambulance officers had told of disturbing encounters with a spirit.

Former nurses believe the Grey Lady is the spirit of a former woman patient, who died at the hospital and is buried at Waimate, still seeking company in an afterlife.

It is said the woman was beaten at home and spent many weeks at the hospital in the 1960s. The woman was afraid to leave the hospital for fear of further beatings, and sought the company of those she knew would not hurt her.

The nurses believe there has been a ghostly presence at the hospital for many years, and say night staff would often find doors inexplicably open or closed.

Former nurses said there had always been reports of a spirit presence at the hospital, particularly from night staff, and there were varying accounts of whose spirit it might be.

Another theory is that it might be that of a woman who hanged herself from a toilet chain in a ward in the 1940s.

Locked doors found open, unnerving encounters – the empty wards of Waimate Hospital harbour a restless spirit. Waimate Hospital is closed, but a tortured spirit dwells within. It is the Grey Lady, and she is restless. The troubled hospital, closed on September 30 last year, is haunted. Locked doors are found open, the sound of breaking glass is reported but nothing found, and ambulance officers who have stayed in a hospital building tell of disturbing encounters with a spirit. Former nurses believe the Grey Lady is the spirit of a former woman patient. The nurses asked not to be named for fear it would identify the woman, who died at the hospital and is buried at Waimate.

They say the woman was beaten at home and spent many weeks at the hospital in the 1960s. The woman was afraid to leave the hospital for fear of further beatings, and sought the company of those she knew would not hurt her.

The nurses believe there has been a ghostly presence at the hospital for many years, and say night staff would often find doors inexplicably open or closed. A security worker says locked doors in the almost-empty hospital are found open; the sound of breaking glass is reported but nothing found. He is convinced a spirit is at work. Ambulance officers who use part of the old hospital as a training base report frightening experiences. Doug Third, ambulance training officer for Otago and Southland, said he and students were staying there early last year. He said he woke suddenly in his upper-storey room for no apparent reason. The room was not cold – until he opened his eyes.

He said he felt as if someone was in the room, and the temperature dropped in an instant. He ran for the light switch, turned on the light, yelled, and the room temperature rose quickly again. Mr Third said he knew something had been in the room: his hair stood on end, and he could not feel the weight of the blankets. He was terrified, and could not sleep again that night.

Kirk Pilgrim, a Gore ambulance officer, said he spent four nights at the hospital and had three frightening experiences. He said that for three nights in a row he woke in a cold room with sweat running down his face. He felt as if there was someone in the room but he could not see anyone. The room was always cold when he woke, but it warmed after a while. He said he was too scared to leave the room, and his skin felt as if it was crawling.

Another ambulance officer, Shane Batchelor, of Invercargill, said he was working at a computer in his room while at the hospital. His light was on, and he suddenly felt as though someone was standing behind him. He spun in his chair to confront the person – he thought someone was playing a trick – and froze. He said he could not see anyone but stared at something for nearly two minutes. He said he did not feel threatened – a sentiment shared by the nurses and the ambulance officers – but was frightened. He would be reluctant to go back. Former nurses said there had always been reports of a spirit presence at the hospital, particularly from night staff, and there were varying accounts of whose spirit it might be.

One theory is that it might be that of a woman who hanged herself from a toilet chain in a ward in the 1940s. Staff found the body swinging in the moonlight. An independent observer, who did not want to be named, said she felt the presence of several spirits in the hospital. The nurses say they were always afraid to go to the basement, and there were reports over the years of rumbling noises. They were told it was the plumbing.

No-one would go to the basement alone. They are sure the spirit – the Grey Lady – is seeking company and means no harm. A former hospital official believes the spirit is restless now that the hospital is closed to patients (district nurses still use one ward). The spirit was at peace when the hospital was still operating.

The nurses believe that if the spirit is that of the former woman patient, she will be seeking company in an afterlife, as she did in life.