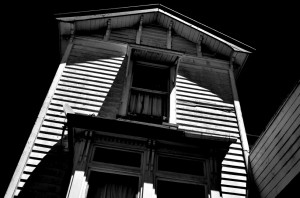 Approximately 15 years ago my husband and I stayed with some friends on their lifestyle block In Te Kowhai, Waikato.

During the course of the evening we were sitting in the open plan lounge/dining/kitchen which also housed the original wood burner stove. At around 8pm we suddenly had an extremely strong smell of pipe smoke waft over us, coming from the direction of the wood burner. It wasn’t lit. Our hosts told us that they often smelt it at this time of the evening and they believed it to be an echo of the former owner who probably sat in front of the stove at the end of his working day. The smell disappeared as quickly as it came.

Later on in the evening we headed upstairs to the study ,in the newer part of the house, to play a computer game (this was before we all had iPhones!) Around 10 pm I decided to go to bed and came back downstairs to where our room was, opposite the kitchen in the original part of the house.

Almost as soon as I lay down I heard the beeping of the washing machine being turned on in the laundry. I figured that it was far enough away from the bedroom that it wouldn’t keep me awake. However, a few minutes after that I heard the dishwasher start up, opposite the bedroom door. I popped my head out to ask my host if I could turn it off till the morning but she wasn’t there. In fact, I could hear all three of them upstairs. Hmmm, she must have moved very quickly and quietly up the very noisy, creaky stairs!

I must have fallen asleep almost the instant my head hit the pillow. I’m not sure how much later it was but I woke to the bedroom door opening and my husband coming into the room and lying down on top of the sheets. I figured he must have had a few more beers upstairs because he hadn’t even got undressed or got under the sheets, but I was too tired to get into a conversation, so I turned over and fell back to sleep.

A short while later I was woken again… by my husband stumbling through the door, smacking his toe on the bed in the dark, stripping off his clothes and noisily getting under the covers. I was not amused! I growled at him about waking me up twice and why on earth hadn’t he sorted himself out the first time he came in?

He had been upstairs playing the game the whole time and had only just come downstairs!

Needless to say, we never stayed a night there again.