Haunted Auckland were contacted to look into, and try to document, strange and apparently ongoing activity in a converted warehouse residence, nestled amongst a busy industrial region of West Auckland’s Henderson. 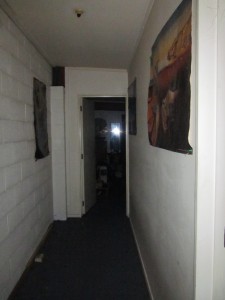 The night was warm and had just seen a light drizzle as the small team of three arrived at the unit which was in a small and very quiet No Exit street. A Pet food factory being the main and largest tenant in the street.

The current tenants, a couple, have been experiencing unusual activity since they had moved into the unit about six years prior. Before that the unit had been used by light industry. The building is a high-ceiling commercial building which has been converted for living space.

The ground floor has a large entertaining room, a large curtained off storage area, toilet & bathroom, kitchen and living area. Upstairs was a lounge area, office area, hallway and two bedrooms. A master and a spare. The unit was two stories and a set of steep stairs joining them located just inside the main door. The entertaining room is built out of a large downstairs room, directly under the hallway, spare and master bedroom areas.

The couple living there were the only permanent residents who actually lived in the area. One of the residents is an artist and there was evidence of that throughout. As a result the home/industrial unit mix seemed to work well.

Based on historic aerial photography of the region it was at the southern end of a rural property in the 1940’s which was subsequently developed as Auckland grew. After further historical digging the team discovered that the surrounding land appeared to have been part of an orchard at one point. The tenants of the property have been told that the land was significant to Maori as there is a river nearby which was used for gathering food and travelling. They believe that Maori people would have used this area routinely as a path to get to the river.

The lounge, spare room, hallway and stairs were the areas where the owners felt that there may have been something due to activity being seen or heard. The Entertaining Room was also interesting. We spent a lot of time in these areas taking photos and audio recordings both with and without team members present. Mounted Infrared video cameras and motion capture cameras were used in the stairwell, hallway, spare and master bedrooms.

While investigating in the workshop at the rear of the building Matthew had what felt like a spider’s web brush across his face.

It only occurred once and no trace of web was left on him. While there were plenty of cobwebs in that area of the building, they were mostly in the corners in and not in the specific area he had walked through. We were advised by the clients that the particular spot was frequently walked through as items were stored there. It is difficult to say whether this was paranormal however, given the number of cobwebs in the vicinity. 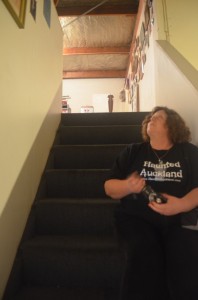 At one stage during the evening (while standing downstairs beside the stairs) Barbara claimed to feel a cold spot on her shoulder which stayed with her for two minutes, before the sensation left. Barbara felt that the downstairs area and the stairs felt fairly neutral to her, however once upstairs she immediately felt “on edge”.

Barbara comments “I felt uncomfortable and on edge while upstairs. It felt like there was something there but I don’t think it was human.”

Barbara and Mark sat upstairs sitting and listening for noises for a while then left an audio recorder running to continue monitoring while they began another audio session downstairs in the Entertainment room. Nothing unusual was noted on review of the audio. Barbara tested her Stud-finder downstairs, turning it on whilst she and Mark conducted an audio recording session in the spare room upstairs.

The entire investigation was continually audio and video recorded for review.

Whilst spending time in the spare room, both Matthew and Barb commented that they had seen a white dress hanging on a clothing rack move while they were standing in the room. However, it was dark in the room and vision was very limited, so it was left decided that the movement may have just been a trick of the light and the dark playing tricks on their eyes. A video camera was positioned in the room set to night shot to try to capture further movement, however no movement had occurred on review.

The Haunted Auckland team completed a full investigation of the premises including setting up infra-red video cameras in targeted areas, taking hundreds of photos and hours of audio recordings. A full audio / visual and data sweep of the building was also done to ascertain that high EMF readings were not contributing to the occupants feelings of paranormal activity.

A Spirit Box and field generator were also used but were not successful in capturing any type of activity. Despite this we did attempt several communication sessions but these also appear to have been unproductive.

It is unfortunate that at the time of our visit there was no activity so we were not able to witness nor document what was claimed to have been happening in the unit.

We do know, however, that the residents of the home are not suffering from EMF sickness as the levels in the unit were the lowest we have ever noted! The people who lived there were very open-minded and practical thinkers and had a good idea of what we were looking for so answered our questions with the information we needed (rather than giving us details which bore no relevance to the investigation).

Unfortunately due to the dog being present and whimpering, most recorded attempts at capturing an EVP weren’t useable.

We found that the EMF readings were very flat over the whole property (base lined to near zero) and the only spikes we noted during the night were generated by one fluorescent light upstairs and the area around the internal power meter box. Given its industrial nature it must have been very well wired.

Temperature readings were constant throughout the house, although the end master bedroom was slightly colder than the rest of the home.

The team took hundreds of photos and many hours of video and audio recordings. Upon reviewing all this we didn’t discover anything that we couldn’t eventually explain. The team did not manage to gather any hard evidence which would indicate that this house is haunted.

Barbara – “I thought that the upstairs area definitely had a feeling that there was something there. However despite taking numerous photos, recordings and videos, no sign of anything paranormal was discovered. This certainly does not mean that the unit does not have any activity, just that we were unable to capture any evidence of it during the time of our visit. I suspect that if we were to return at a time when the activity typically occurs we may have a different outcome, however at the time of our visit I found no evidence of any haunting.”

Matthew – “I believe we were thorough in the time we had available. Given some of the claims and their specific locations, this may have benefited from longer term monitoring with a DVR system over several days, however this may not be possible with the equipment we have available at present. Is the building haunted? It is difficult to say in this case. The claims of the creatures seen were not like your standard haunting case, and sounded more elemental. The reported footsteps failed to occur when we were there and the other claims seemed to be personally linked to the occupants.”

Mark – “It was a good, relaxed investigation and it was good to sit and chat with these people about their odd “visitors”. At this time however, I unfortunately didn’t see, feel, hear, or was able to experience or document anything unusual at this session to indicate that there was anything paranormal going on in the house. I would have to say that on first impressions, that the house isn’t haunted.

Having said that, the couple are adamant that they are experiencing these things, while they are wide awake and alert and a lot of the time, they both experience these things at the same time. The couple are not dependant on any stimulants or hallucinogens, are not drug or alcohol reliant and seemed rational, intelligent and lucid. Though they do take basic medication for depression, this would not have the side effects of causing such experiences, so I do not consider this a contributing factor.

The couple consider themselves Antitheists, so religion and spirituality had no real bias in their claims. I believe the couple are being honest in their claims and feel that the building could do with a further follow-up investigation in the future, if the activity continues.

We have requested the clients log any further occurrences to determine whether there was any trend or pattern to the phenomena, which might allow us to target more active times in the future.