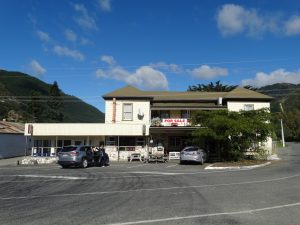 Canvastown,  the home of the Trout Hotel, is 50 kilometres west of Blenheim, is a locality at the point where the Wakamarina River joins the Pelorus River, in Marlborough. Named after all the miner’s thick canvas tents that were set up all over the land, the town was founded in 1864, after gold was discovered in the Wakamarina Valley. As many as six thousand miners came to the valley in the hopes of making their fortunes. Where there had previously been a Maori Pa, streets of tents sprang up providing accommodation, restaurants and taverns to a population of about 3000 people. About 25,000 ounces (710 kg) of gold was recovered in 1864. The surface gold was worked out within two years and most of the miners moved to new gold discoveries on the West Coast. Steam dredges continued to work the river into the 20th century.

The Trout Hotel was built in 1904. It was one of the first properties in the area to have running water and electricity.

Its original name, the Pelorus Hotel, was changed in the 1960’s but an extension in the 1970’s is the only large structural change to the main building. In the early 1990’s the pub was threatened with closure, so Canvastown residents stumped up the money to keep it running, employing outside management.

It has two six-bed self-contained units, 11 hotel beds, a two-bedroom owners’ flat upstairs and eight bedrooms to let. There is also a two-bedroom cottage and four campervan power sites.

Current owners Raymond and Karen Cresswell, purchased the Trout Hotel back in 2002, but have decided retire and sell to pursue other interests. A lovely welcoming and down to earth couple that were were happy to sit and chat for a bit. Both consider themselves sceptics when it comes to ghostly things just “don’t really believe in all that stuff”, though their Facebook page does admit, with tongue firmly in cheek, “this beautiful hotel is well over 100 years old, filled with vibrant atmosphere and has the most wonderful clientele who know how to party. Some even say it has more than liquid spirits.”   While they say the building can be a little creepy at times, they haven’t experienced anything themselves.

We asked our readers if they had any spooky stories to tell about the Trout Hotel. I had previously heard that there are often heavy “boot-like” footsteps heard in corridors or on the stairs, doors opening and closing and voices coming from locked rooms. Without any prompting, a few that replied reported the footsteps. “heavy footsteps from big boots. Canvastown used to be a very big gold mining operation and a lot of miners would stay there”.

“We heard two men talking right outside our room late at night. When I opened the door to ask them to go, there was no one there.”

“About 25 years ago we went there. It was a week night and was dead quiet in the area. We were the only ones there. We walked in and smiled at the man behind the bar wearing a bowler hat. Sitting down we had a giggle at how old fashioned he was. We figured he was just theme dressing for the pub. After a few minutes we decided to go to the bar to order drinks and a meal. Another guy came out from next door and seemed shocked, as he hadn’t known we were there, so apologised for making us wait. He said he was working alone that night and that we were the only ones to come in for ages. On telling him it was OK as the ‘other guy’ had seen us come in, he looked confused. ‘The other guy? I’m the only one here’, he exclaimed. We left it at that and quietly ordered our drinks, not knowing what to say after that.”

I visited this beautiful old pub during a trip down to Blenheim for a family funeral, in April 2017.

I thank Raymond and Karen sincerely, for allowing me behind the scenes access to the Trout Hotel to photo document the surroundings of this stunning old piece of New Zealand history. I also wish them all the best with the sale of the business and their future endeavours.