“Telepathy – The communication of impressions of any kind from one mind to another, independently of recognised channels of sense” 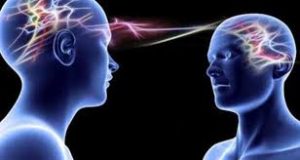 Whilst researching, investigating and experimenting in the paranormal field, more specifically during communication between sensitive’s and possible spirits, I wanted to discover an easier way to document the communication. I wanted a method that could help me see what was going on during the communication simply, rather than referring to multiple sources in order to understand the short event.

Over the years I have tried many things, but whilst reading about Quantum Physics I discovered Feynman’s Diagrams and began to wonder if there could be a way of incorporating a similar approach. Oddly this also identified something else which I had felt was missing or perhaps not quite right, which was the vocabulary. I wanted to change some of the terms in order to move away from assumption and begin to create something more probable.

This paper outlines how telepathic interaction during ‘paranormal occurrences’ can now be documented using my ideograms quickly and simply. The diagrams can also in some cases be reduced to define the most probable source of the interaction, thus determining if it is a good example of survival or not.

The Theory of Telepathic Interaction: By Ashley Knibb