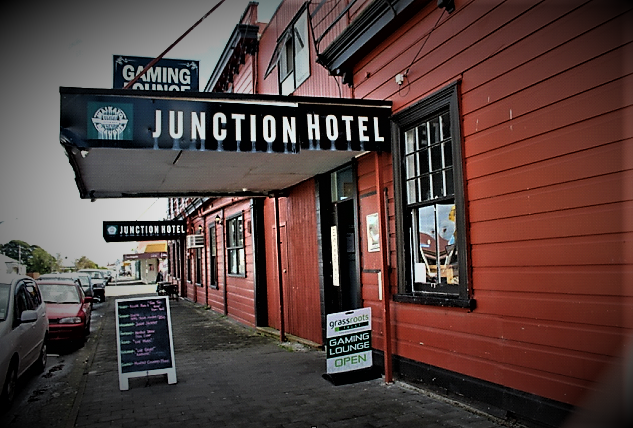 According to hotel staff, a man hanged himself (100+ years ago) in one of the upstairs rooms. Two or three other people have passed away also, while in the hotel.

The manager tells us of a psychic friend, who lunches frequently in the hotel, always complains about a spot in the hotel. Down the hallway from the restaurant, there is a door entrance that used to lead to the other bar, There had been a black sheet hung over it to cover it up – the psychic believed that there is bad energy there. The complaints about the restaurant hallway where the black curtain is currently hanging, started when renovation began down that end of the building. People who described themselves as sensitive’s felt there was a man that hanged himself over there. The renovation took place when she started working there 8 years ago.

The renovation downstairs consisted of them opening up the whole downstairs area bit that was previously divided into smaller room areas. The saloon was where the current bar is still, as well as the restaurant bit, all stayed the same. The second set of stairs at the back was not originally there, that was added on.

There was a cleaner who had worked for the hotel for around 30 years. She was adamant there was a ghost up there. She was the one who found the dead body of a man in Room 6 who had committed suicide.

The staff have told us stories of a 12-year-old “ghost girl” that hangs around in the hotel and an “old man spirit”.

A young boy; blonde hair and wearing olden day attire is sometimes sighted in the hallway.

Strange noises have been heard; running footsteps and things falling where nothing is found.

One incident that was mentioned to us – A couple of years back, a young girl dropped one of the owner’s large cut-out wooden names – he got really upset (it was his niece) so they put it back up and left, then as she came back around that same corner – one of the wooden letters flew at her, where it shattered and broke into many pieces. She then realised it was not the little girl who had dropped it in the first place. She actually had this feeling it was flung on purpose the second time as a means to demonstrate “its” anger that the 8-year-old girl had gotten in trouble for dropping that letter previously. She goes on to explain she thought it could have been a child’s presence that did that on purpose. It was the wooden letter G that got thrown- and so could not be repaired but had to be replaced.

In the past, staff that had come in early for work, at 7:30 am in the morning, reported hearing children playing, giggling and talking. They looked out the window, went outside and saw nothing, no one around; they got really scared and left the building.

Clocks are always breaking (stop working) inside the hotel. Little things always seem to go missing or being misplaced. Staff would then joke amongst each other it was the ghost.

The bell in the kitchen has been known to ring at night (obviously when there is no one there).
One customer that has stayed at the junction hotel numerous times when he comes to Thames regularly for business claimed that on one night in particular, he woke up and felt a presence with him in the room, this lasted for at least 20 or so minutes. This was Room 14