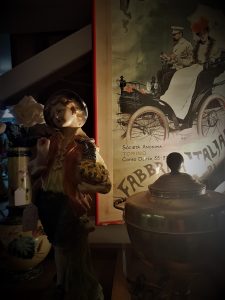 Can spirits attach themselves to an item or location?
Can an object become cursed, possessed or haunted?
If one item can hold an energy / curse / entity (in theory), what happens if a whole room is filled with these items? Would that mean a concentration of energy? A clashing of energies? Would entities interact with each other? What happens when curses come near other curses? Would any of the objects affect any team members in any way? Physically, emotionally, psychologically? Would us being there make any difference? Would anything follow us home afterwards?

As a collector / paranormal ‘’foster parent’’ of items that seemingly have a haunted reputation and tend to create unwanted fear and tension within the homes they reside, I have long held a fascination for the idea that spirits and various energies can apparently adhere themselves, or be absorbed into the very fabric of a particular item.
Perhaps an item can be cursed using some dark magic ritual; be it a personal belonging of the deceased, a car, old furniture, portraits and mirrors, Ouija Boards, wedding dresses, a favourite toy (dolls are a common item) or just some random and unassuming household object that appears to hold something unexplainable within, that somehow creates some overwhelming emotion for anyone holding or near it. Cursed and haunted objects have also been blamed for causing mysterious deaths and suicide.

As Paranormal researchers it is something of a duty for us to look into such things. To at least try to filter out the fairy tales from the fact. Claims of allegedly haunted items are a worldwide phenomenon and go back hundreds, even thousands of years. Stories of dolls being possessed by previous owners, walking and talking are common and seem to be a popular form for the spirits to take on as a host. Portraits and people in paintings are said to move; faces appear in mirrors and toys activate on their own; even without batteries.
I have to say that in all the years I’ve been collecting and giving these unwanted dolls and things a home, I’ve yet to see anything happen for myself. I will admit I’ve heard scuffling noises and the odd tapping coming from the room, though when I’ve gone in there are no signs of movement and nothing appears to have been disturbed.

The team all collectively share a common interest in the idea of haunted or cursed items, so we have set up a project of sorts to try and see first-hand if there might be anything to all the stories and hopefully we’ll get lucky in documenting something interesting in the process.
What we needed were items, many many items. Items with age; a history. Items of personal significance or historical family importance. Things with memories and a past life. Valued objects and favourite belongings. Ritualist tools and ceremonial wear, medical equipment, family portraits…..deceased estate artefacts that meant something to the deceased prior. We needed a place that was filled with all these things. A room filled from floor to ceiling and from corner to corner that we could immerse ourselves and some equipment in for a night (hoping for more than one!) seems like a good plan for now and will hopefully aid our research somehow. Maybe.

Hey, it’s worth a shot and there’s nothing gained by not giving it ago. After all, the field only moves forward with experimentation, observation, research and documentation. Trial and error etc.
So anyway…. the team will be staying overnight in an antique store. Not saying where, as we need to keep this session as controlled as we can, but it’s not just any old antique store. The location has been chosen specifically for it having the potential to be more controlled than many of the others we have looked into. Many of the usual annoying audible and visual contaminants that hinder our recordings and footage should (hopefully) now be eliminated, giving us better potential evidence capturing opportunities. You’ll see what I mean later.

We will disclose the location after the investigation. Promise!

This Friday night (May 3rd) if you’re interested.
Hopefully the signal will be clear on the night and we’ll catch you on a live feed!  – Mark