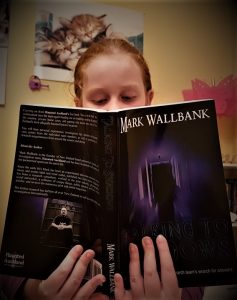 I’ve seen him more than once.

A few times in some of the houses that we’ve lived in before, but the time I remember most clearly was when we moved into the house that we live in at the moment.

I usually see him around the same week or so that we move into a new house, which also (coincidentally) always happens to be around the same time as my birthday – so around May.

I remember waking early one weekend morning to watch TV.

Mum and Dad were still in bed and both of my brothers were staying over at their Dad’s house that week.  Where I was sitting on the couch I could see something moving out of the corner of my eye. I turned and looked more closely. It was a small boy and he ran from the hall where my bedroom was, through the kitchen and into the dining room. He had dark hair and very white skin. I remember he was wearing a plain red t-shirt and he was wearing dark blue shorts that went past his knees. What was strange about him though was that he didn’t seem to have a face. I don’t know if it’s because he’s running too fast or because he always seems to be turned slightly so that I never really see it – but I never see it, and it just seems like he doesn’t have one.

He never makes any sound, not even footsteps when he’s running. I haven’t tried talking to him yet but I’m not sure if he’d talk to me because he’s too busy running. I knew I’d seen him before in other houses we’d lived in but I still get a shock every time I see him because he’s a stranger in my house and I know when I see him he really shouldn’t be there.

After I had seen him run into the dining room I got up off the couch to see what he was doing. But he wasn’t there. I even looked out the window thinking he may have jumped out, but it’s a bit of a long way down. It’s strange because it’s only me who sees him. I mean I’m always alone when he decides to run through the house. I wonder if he wants my attention or if it’s something to do with me. I wonder if he may be trying to play hide and seek, and that’s why I never see his face. Or maybe he’s part of the family and just excited to see the new house.

I also wonder if he moves things in my room, because sometimes I think I put something away and then I got back and can’t find it – only to find it days later in a place that I know I wouldn’t put it. It’s often things in pairs that go missing like shoes or socks. When I talk about him I think that he may be a ghost but then sometimes I think that it could just be in my head because no one else has seen him. I do know that every time I’m wide awake though. There was one time that I did see something in my room.

I’m not sure if it was the boy or something else but I feel like they may be connected. I was in my room sleeping one night and I heard a funny sound. I sat up in bed and reached for my princess torch. I turned it on.

It’s only a small torch, but it has lots of light -blue light that comes out, and when I turned it on I saw a really horrible face by my bed. It was just there looking at me and it looked like it was shaking or vibrating. It was very white but it had big black eyes and a wide, black mouth that looked like big holes. I’ve seen my Dad’s ghost books before and seen photos and it really looked like nothing I had ever seen before. It’s hard to describe. I screamed and ran out of my room and got my Dad to have a look around. He couldn’t see anything and told me to go back to sleep. There have been other times in my room where I think I see a hunched over shadow and get scared thinking that this face will appear again.

Again I’m not sure if this is just in my head or not but it seems so real. I do believe that ghosts are real though. I’m pretty sure that we have a ghost cat in our house. I’ve seen a tabby cat in our kitchen before that looked just like our cat Charlie. It had a different face to him though, and when I went to go closer to pat it, it just disappeared into a grey mist. It was really weird!

One day when I’m a bit older I’d like to go out with my Dad and see if we can find some ghosts and talk to them so that I know that they’re real and not just part of my imagination.
Hopefully I won’t get too scared. 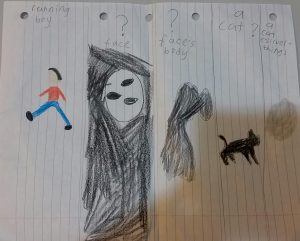