The team checks out one of Auckland’s oldest department stores to find out what lurks in its subterranean labyrinth of storerooms. 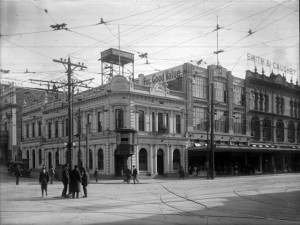 Marianne Smith was a gentle lady if not stern who was a woman very much ahead of her time. She was born Mary Anne Caughey, in Ireland in 1851, her father a grocer, mother a homemaker. She met her future husband William Smith through her older brother Andrew as they worked together in a drapery store. The newlyweds, married in 1874, moved to New York City and William worked in a Drapery Store. Marianne spent her time helping at the famous mission in Water Street run by the evangelist Jerry MacAuley and at the Door of Hope, a refuge for single mothers.

Returning to Belfast around 1879 the Smiths started a charitable mission in a poor part of the city, but William’s health deteriorated and they decided to emigrate to New Zealand. The couple arrived in Auckland in early 1880 and Marianne opened Smith’s Cheap Drapery Warehouse on Queen Street. Because the new firm could not support both husband and wife, William initially worked for another draper, but by 1881 Marianne’s store was doing so well William was able to join her.

In 1884, Andrew Caughey who had also emigrated to Auckland, was with the Methodist ministry and went into partnership with William, the firm was then called Smith & Caughey. The omission of Marianne from the partnership reflects the role of the married women at that time, but she remained vitally involved in the business. Whilst still being involved in their charity and missionary work they continued to run the store. In 1900, William and Andrew had formed a limited liability company. Although Marianne was not one of 8 directors, she did have shares in the growing company. During one of William and Marianne’s buying trips back to England in 1908/09, they informally adopted a son, Reginald. William died in 1912, leaving Marianne a wealthy widow with a small child. She withdrew from active mission work about this time, but retained a strong interest in Smith and Caughey. In 1916 she joined the board as a director (a position she held until her death in 1938) and always attended meetings. She increasingly identified as a Caughey and was often referred to as Mrs Caughey Smith. She still continued to donate charitable gifts. 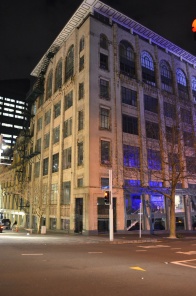 The Riots in April 1932, on Queen Street, caused all the glass windows to be broken. Architect Roy Lippincott designed the new building and the new front facade in Queen St. This was completed in 1940. In September 1932, Marianne married the Reverend Raymond Preston, a retired Methodist minister from Sydney. He was 71, she was 81. In June 1935, Marianne was made an MBE for recognition of her charity work and sizeable donations. 1 September 1938, Marianne Preston died at her Princes Street home. She was survived by her second husband and estranged son. A trust she established holds nearly half the shares of Smith & Caugheys and administers to the Caughey-Preston Rest Homes and other properties. Four generations of Caugheys still own and run the department stores.

Grant took one team up to the sixth floor ballroom and were advised that this was a “Ladies Only” floor in the 1930’s. This was a well-kept secret, but with the background that Marianne Caughey Smith had, she would have had this floor available for single women, married women and as a sanctuary for the abused and mistreated ladies of that era. We split into 2 teams, Kel, Barbara and Matthew stayed on the sixth floor while Mark, Tanya, Heather and Lauren went to investigate the basement.

The Lyceum Club (a.k.a. The Ballroom) 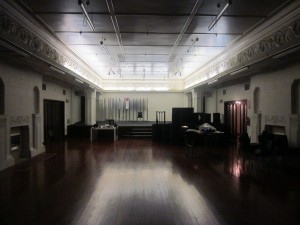 During our session of the upstairs top floor, our group conducted a full photographic, infrared video and audio sweep of the entire floor, including all the side rooms, hallway, back storage rooms and toilets. Mark, Tanya, Heather and Lauren held a couple of EVP (Electronic Voice Phenomenon) sessions, one in the main ‘dance hall’ room and a brief one up on the stage. Tanya commented during the EVP session in the main dance hall, that she could hear something coming from the other end of the room near the stage. Heather also thought she had heard a sound.

Kel, Matthew and Barbara held their own EVP sessions hoping to contact the spirit that had been sighted there by an employee recently. During one of the sessions, Kel said she felt that something was beside her and that there was a cold spot there. Barbara went over to where Kel had indicated it was to try to confirm that there was a cold spot, but couldn’t feel it. As Barbara walked back to her seat she felt a small draught go past her. Matthew felt it could have been caused by a nearby fireplace, but it was not from that direction. After Barbara had sat down Kel said she had her hair touched. They asked whoever had done it, to touch Barbara. A few minutes later Barbara felt the hair at the nap of her neck being ‘touched’ very gently. Barbara had the sensation both of her hair moving and of movement on the back of her neck. After mentioning it to the others, they asked whoever it was to please touch Matthew, the more sceptical of those present. Imagine our surprise when a few minutes later, Matthew said he had the sensation of a ‘tickle’ on the back his neck. 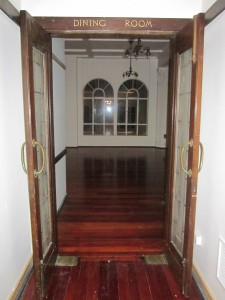 Whilst in the hallway, Kel, our “sensitive” was able to receive a lot of ‘communication’, talking and whispering at the same time. There were multiple conversations.

She asked ‘them’ to stop talking at once.
Kel was asked “What are you doing here?”
She replied “We have come to say hi”.
Kel was then questioned, “Why?”
She replied “We are curious and would like to talk to you.”
Kel could not pick up if the entity was female or male.

While Kel was in the kitchen she felt the presence of a woman. When she asked her name, the entity replied Maraina. (Was this Marianne herself making contact with Kel?) Kel could visualise that Maraina was dressed with a thin head band around her forehead with a peacock feather sticking out at the back.

She had a white short dress on with a vest with patterned peacock feathers. Since Kel was the only one to sense this, perhaps she had psychically witnessed a time gone by. Where dancing at high tea was a favourable pass time?

The Basement (a.k.a. Inward Goods Dept)

Whilst Barbara, Matthew and Kel were conducting their investigation, Mark, Tanya, Heather and Lauren headed down to the basement level below the main department store levels.  This is where the inwards goods deliveries, stock control, product storage and sorting takes place. On a daily work day there are around 30 staff working on the basement level.

Grant (the Manager) showed us the inter-room escape tunnels built during the 1940’s in case of invasion during the war. Below the main department store is a maze of ‘underground’ tunnels and walkways heading in all directions, which we found rather disorienting sometimes, especially in the dark!

In the basement level area, where an alleged apparition has been sighted many times by staff, we noted a very large electrical voltage box power generator which apparently fed the entire department store.  This filled an entire wall in its length and to the ceiling in its height. The EMF (Electro-Magnetic Field) Meter was off the scale showing that the electrical field being emitted by this beast was very high.
This would’ve been enough of an electrical field to trigger off headaches, sickness, paranoia, uneasy feelings and even hallucinations, if enough time was spent around that area. We also noticed that there were power cables coming from the power generator, branching out along the ceiling to cover other departments around the underground maze workplace. 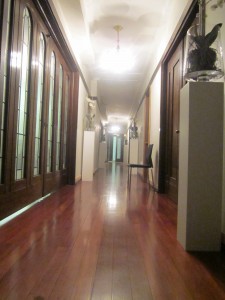 Further along in the basement we held a short E.V.P. session. At one point we heard footsteps walking across overhead and then what sounded like the creaking of an old iron gate. We were told later by Grant the Manager that the security man had walked across the level above us and had locked a door behind him. The sound of young children’s voices playing was also briefly heard. Heather felt there may have been a playground or crèche in the building there at some point as there was a painting of a large fish on the floor.

Heather expressed feelings of being touched around her neck by an icy cold sensation. Tanya thought she heard the sound of a dog.
All members in our group heard a short rattle / shuffling noise coming from somewhere in our area, soon after the ‘children’ sound.
It sounded like the chicken mesh wire on the timber-framed walls, being, knocked or shaken briefly.

While Kel and Barbara were in the basement with Matthew they both thought they heard a woman’s voice say something but this was not picked up by the audio recorders at the time. Barbara both felt the sensation of being followed.

Just before we concluded this investigation we briefly visited the Cash Room, where an apparition had been seen by employees but our equipment and attempt at communication yielded no results.

Quoted by our team leader Mark:
“In my opinion, I feel that if there is any spiritual or paranormal based entity or presence within the Smith and Caughey’s building it would be purely residual. The essence, sound or energy of the large numbers or staff and patrons that would have been within its walls and through its doors through the many generations, might surely have imprinted itself within the building’s structure.
If so, it may be these ‘essences’ that are being seen, heard or felt. Alternatively, a more mundane and scientific explanation could be that the activity could all just be caused by the high electrical fields that were detected within the building during our session.
Either way, The Smith and Caughey’s Building is a stunning piece of real estate with many stories to tell. It was a true honour and a privilege to be allowed rare access into this iconic and historic piece of Auckland royalty.”