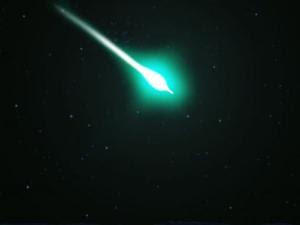 Sky-falls, for want of a better term, have occurred throughout history, even being mentioned in the bible.

Frogs, fish and plant material – in one case broad-bean seeds in England – are the most common forms of sky-fall. However, other anomalous substances have also been seen to fall. There are many reports of blood and offal.

On February 15th 1851 in Simpson’s County, America, a large area was covered by a fall of blood and what essentially amounted to offal.

On the afternoon of July 24th that same year, in San Francisco soldiers were splattered by a fall of blood and meat. California on Hudson’s farm near Los Nietos in 1869 strips of bloody flesh fell from a clear sky; some witnesses to the fall spoke of the fallen meat resembling beef.

Was some maniacal Butcher dumping offal and animal byproducts on earth? No explanation was found for these incidents.

Fiery rain was reported on November 13 1883 by the town of Rahway, New Jersey. Glowing globs struck the ground and remained as a jelly-like substance, after a which disintegrated into a white powder. On September 26 1950 two police officers witnessed the fall of a shimmering object into a nearby field. On investigation they discovered a purple jelly-like mass lying in the field which pulsated almost as if it were a living entity. This mass, upon being touched, disintegrated. After 30 minutes the remainder of the jelly evaporated and turned into a sticky substance.

Recently in Willoughby small dark greenish brown spots covered a mile-wide area . Initially industrial contamination was blamed and eyes turned to the CEI smokestacks in Eastlake a few miles away, however damage was too confined and investigations showed no emissions could possibly have drifted that way, or even come from the plant. Due to the look of the spot splatter, spray-painting overspray was suspected, however investigation showed no such goings on in the area.

Next to come under suspicion was Shotgun Fungi (Sphaerobolus stellatus). This amazing fungi can shoot spores in a cloud over 20 feet high covering a wide area – it too was ruled out. After the spots were put under the microscope they were found to contain chlorophyll. The answer became evident. The spots were the result of the last meal of midge larvae, in this case alga and vegetative material – a residue from their transformation into adults.

In New Zealand during 2003 falls of a brown, offensive-smelling substance were less easily explained. These falls were not just confined to a single area but happened throughout the country.

The falls began in early September and persisted through October. Reports came from all over the Country – from Christchurch, The Hutt Valley, Wellington, Hamilton and Palmerston North. People and buildings were hit; it had a very strong fecal smell and was very hard to remove.

During the falls of this unknown material a radio station rang me for an interview. The angle? Are UFO’s dumping their sewage over innocent people’s property? I knew that this was not the case, but this was the odd spot news that media love to run, so without being too committal I played along, things like this didn’t happen everyday in New Zealand.

At this stage no analytical results were in on the substance and speculation was rife. Theories ranged from leaking airline toilets to expelling waste over populated areas, however analysis of the substance showed none of the telltale chemicals used in airline septic systems.

Rumors began, some suggested giant birds were responsible, then there was the ever-popular alien sewage flush, the public had made up its mind.

The explanation finally came from the Department of Conservation. This foul-smelling substance was the result of nesting female ducks gorging themselves on food then defecating. Once nesting the females only leave the nest once a day to eat and defecate.

The timing of bombardments also implicated the ducks as their nesting season is from early September through to late October.

While defecating in flight, with the distance that the material had to fall and the wind it would create quite a splattered mess. Even a single bird could leave wide-spread splatter.