by Mike Barrington [The Northern Advocate] 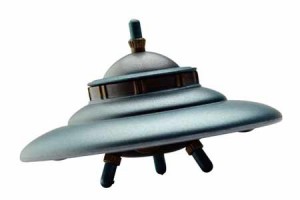 Mystery lights seen in the sky over Tutukaka could have been alien cosmic masters cruising by in their flying saucers. Or they may have been Chinese lanterns released by European backpackers partying on a nearby beach.

Mal Egginton at first thought he was seeing a plane when he watched two orange-red lights moving swiftly from north to south as he was closing doors on the deck of his Tutukaka Block Rd home at 9.35pm on Monday. But the lights seemed too bright for an aircraft and, although they appeared low, there was no sound.
The lights disappeared in the south, but two more appeared minutes later and he called his wife Alison out to watch as the “amazing” lights again passed overhead. Mr Egginton put the lights down to a meteorite shower. Alison found them so perturbing she phoned Civil Defence in Whangarei to let the authorities know.
Their neighbour, education consultant Lin Sneddon, called the police.
“At first I thought it was a helicopter and I couldn’t understand why the lights weren’t flashing and there was no sound. Then they shot upwards and disappeared,” she said. Mrs Sneddon, her psychologist husband Dave and four lodge guests saw a total of six lights which appeared at close intervals.
When one of the lights went out, there appeared to be a large grey shape descending toward Ngunguru.
Mrs Sneddon said there was no wind and the silence accompanying the appearance of the lights was “strange”.
Her “skeptic” husband had considered they could be Chinese lanterns, which had been the explanation for other mystery lights reported in Napier and Christchurch on Boxing Day.
Gordon McKenzie, from the Aetherius Society in Auckland, said the lights were possibly visiting extraterrestrial cosmic masters, which society members believed kept watch over the Earth and tried to guide humans into better behaviour.
But MetService weather ambassador Bob McDavitt agreed with Dave Sneddon that the lights were “almost certainly” Chinese lanterns.
“You make them by wrapping some red cellophane around a candle, attach a helium balloon and away she goes,” Mr McDavitt said.
Releasing the lanterns around Christmas and New Year was a European custom, according to Mr McDavitt.