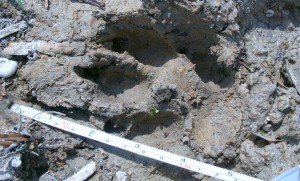 While to most, the full moon represents frantic driving and unpredictable behaviour, to those in the business of ‘monsters’ it is significant for an entirely different reason — lycanthropy, i.e. werewolves.

Now, before you place the butterfly net over my head, please be advised that, while generally perceived to be strictly, fictional creatures from literature and fairy tales, modern accounts of these terrors do exist.

Most notably, Wisconsin’s Beast of Bray Road, described by eyewitnesses as displaying the characteristics of a large wolf stalking the local forests and corn fields in an upright posture. During 2008, I had the distinct honor of traveling to France for a History Channel television special where I investigated The Beast of Gevaudan, which was alleged to have attacked hundreds of simple farm-folk during the late 18th century. Evidently, the notion of real werewolves has been around for a while. Few San Antonio residents, however, are aware that the nearby community of Converse boasts its very own man-beast legend. According to the story, which I’ve found attributed to the 1800s and as recently as the 1960s, a local rancher instructed his teenage son to strike out to shoot his first deer (as a passage to manhood, no doubt).

The youth was reluctant to bloody his hands, but begrudgingly obeyed his father’s command and journeyed to a wooded place known as Skull’s Crossing. He soon returned home trembling with fright. He explained to his father that he had run across an animal that resembled a werewolf. Thinking that his son was merely making excuses, the rancher forced him out again, stating that he should not return unless he had managed to bag some game.

After the sun had set, the father became concerned and set out to locate his missing son. It was then, according to the tale, that the man spotted the lifeless body of his offspring in the arms of a creature that stood eight feet tall, combining the features of a wolf and a gorilla. Being that the moon was in a full phase this weekend, I decided to head over to Converse to mount my own werewolf hunt (sans the silver bullets). I first stopped at the local City Hall and library to seek more information. But due to poor planning on my part, both had closed early for Easter Weekend.

So, I instead decided to search the area around Converse City Park, the only area that remains largely undeveloped with the potential to hide such an elusive creature. I found the park to be quite charming and serene, with colorful wildflowers and fluttering butterflies in abundance.

However, my search of the muddy banks of a small lake did turn up one intriguing bit of evidence, an enormous canine track, displaying long claws and pressed an inch into the ground. Admittedly, the spoor more than likely belonged to a very large dog.

Still, I like to imagine that behind the legend of the Converse Werewolf lies, perhaps a tiny shred of truth.