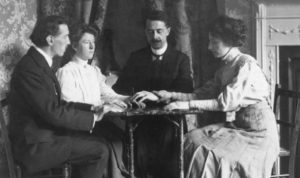 I think it’s best to begin answering this question with my honest understanding and general opinions of both Mediums and Psychics.

I believe a Medium is someone whom strictly believes that they can communicate with the spirits of the deceased, often acting as a bridge to which the dead can speak to the living through them.

I believe a Psychic to be someone who can sense the unknown by using physical channels such as a Place or an object that carries energy from the past and can often “sense” spirits of the deceased through these energies.

At times the two titles have been used together to describe individuals (Psychic-Mediums) which covers both definitions and abilities. Clairvoyance – the ability to “see“ either future events or current events remotely from a distance is also an ability that can be attributed to Psychics and Mediums.

Do I believe that genuine Mediums and Psychics exist?

I’ve had many readings done through the years, people whom I had made appointments with. Some things they mentioned made me think “Wow” at the time, perhaps my great uncle Ed really was with me in the room at the time wanting me to know he was there watching over me as my guardian spirit. But often on reflection the messages and predictions were so vague that I wondered if they could have applied and made sense to anyone that had been in to see them that day.

It was a complete stranger that approached me in a crowded bar in Auckland City that confirmed for me that there are people out there that are truly gifted with these uncanny senses. I noticed that this woman had seen me from across the room; she waved as she made a beeline for me and sat in the chair next to me. To be honest I thought it was either a case of mistaken identity or just a random attempt to weasel a free drink out of me – but no. She assured me that she had a message for me. Without going into too much detail it was in regards to a pretty big family secret, in fact it was information that I’d only just found out that day, something that had been kept secret for the better part of 50 years that only those involved had known, and now only those in my immediate family should have known. She used first names, last names and ages of people involved as well as the general area in which the event had taken place (outside of Auckland). There were also further details and names that she had mentioned specifically that I had no knowledge of at the time but were confirmed through other family members. The message that she had given was from a passed relative (not specifically one that I’d had much to do with in their living years).It was to keep calm about this new information and to not react despite my very desperately wanting to. And thus far I’ve kept that promise.

So yes, given the fact that these were details that not even the close friends that I was with at the time knew (let alone a complete stranger), and the fact that this information pre-dates the internet and wouldn’t have been public information anyway had my mind completely stumped as to how this person knew – and with such accuracy too. I find it hard to come to any other conclusion at this stage.

Back to the question: How do I feel about Psychics and Mediums being used in paranormal research teams?

Where it can become difficult however is finding someone with a genuine ability to do what they say they can do, someone whom can recall the kind of information that goes beyond public knowledge (yet can eventually be confirmed). I would personally be a little sceptical if I were to investigate a haunted location and the only information I was hearing from a Psychic or Medium was the same type of information that I could have seen myself in a pre-search on the internet or through visual clues at the location.

I when paranormal T.V shows are concerned, the use of Psychics or Mediums and often be portrayed as a bit of a joke at times and I’ve found myself rolling my eyes from time to time. But these of course are paranormal shows in general. We should all know by now not to take them too seriously. They’re entertainment and that’s it, the rules will be bent for most of them in the name of ratings regardless of the portrayal of Psychic, Medium or even Investigator. However I think it’s easier for the general public to invest their trust in the activity captured on camera by the Investigators in a “seeing is believing” kind of way. Capturing footage of a potential spirit on camera or footage of an EMF detector bleeping away in a communication session is something that everyone can see right away compared to the ideas and claims from a Psychic which would need validation at a later date and can’t easily be seen by everyone. Truth-be-told however there is plenty of reviewing that goes on after investigations, especially where filming and audio recordings are concerned and I think it makes things a bit more interesting if any activity that’s found on review matches any of the cues given by the Psychic.

In reality I think it’s best for everyone in the paranormal field to be respectful of one another. We’re all constantly learning and growing so to close ourselves off to different ideas and techniques would be a silly move in my opinion.