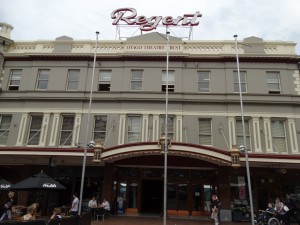 The Regent Theatre is a theatre in Dunedin, New Zealand with a seating capacity of about 1,650. It is in The Octagon, the city’s central plaza, directly opposite the Municipal Chambers (Dunedin Town Hall) and close to the Dunedin Public Art Gallery.
The Regent Theatre stands on the site of Dunedin’s most disastrous fire, whereby on  September 8th, 1879, fire swept through the Ross Building claiming twelve lives, on the site of the Regent Theatre.
Originally a 2,000 seat cinema the Regent opened on 1 June 1928, and the interior is elaborately decorated in a revived baroque style, characteristic of the super cinemas of the time. The design is a variation of Robert Atkinson’s for the 1921 Regent cinema in Brighton, England, which was demolished in 1974. There were comparable picture palaces in other cities in Britain and Australia, few of which now survive and, apart from the Dunedin building, none in their original form. (There was one in Brisbane which survived until recently, Regent Theatre (Brisbane), another in Sydney, Regent Theatre (Sydney) demolished in 1988, and a still existing but re-modelled structure in Melbourne, Regent Melbourne.) All these designs are descended from Charles Garnier’s for the Paris Opera, (palais Garnier) completed in 1875. The Regent’s auditorium succeeds in replaying the exuberance of the original in a very different time and space.
The Dunedin building’s supervising architect was James Hodge White (1896-1970), one of the founders of the Dunedin architectural firm Miller White & Dunn. It was sited behind a building on the Octagon designed by David Ross (1828-1908) which was first opened in 1876. The Octagon building was given an additional storey in 1880 and remodelled at the ground floor in 1928 to provide the present theatre entrance.
Purchased by the Otago Theatre Trust in 1973, the building has since been adapted to work as a live venue, although it still also functions as a cinema during film festivals every year. It is now owned by the Dunedin City Council.
At the end of 2010, the theatre began $7.5 million refurbishments including upgrading the flying system, replacing the chairs, carpet and other work. It was re-opened on 30 July 2011 with a ‘thank you’ concert for sponsors.

Who kicked the seat? And other theatrical riddles

Since the Phantom of the Opera has been running at the Regent Theatre, two battery-operated clocks in the function room of the building have stopped at 9.40. Nobody knows if it was am or pm.

That is mystery number one.

Before Wednesday night’s show, Alan and Jenny Bromell were sitting in their seats in row B, downstairs in the theatre. Mrs Bromell said it felt as if someone was kicking at her seat.

Mr Bromell reports: ”We thought it was people just walking in and the whole floor shaking – but there was no-one behind us at that time.”

The couple changed seats. The result was he then felt the kicking.

Just to make sure, the couple called in an usher – she felt it too. Thirty seconds into the performance it stopped. At intermission it began again.

A staff member from the Regent used a walkie-talkie, communicating with other staff who maintained there was absolutely nothing below the seat in question.

The performance started. The banging stopped. That is mystery number two.

During Sunday’s performance a chandelier that drops from the ceiling to the floor during the show, run by a computerised winch, glitched.

Not once. Not twice. Three times. That is mystery number three.

We were given access to photo-document the building on Nov 26th, 2015