The Otuataua Stonefields, near Ihumātao, is one of the Auckland’s last volcanic areas where you can see the large-scale stonework and earthwork remains that show how people once lived and worked. A stark reminder of Auckland’s volcanic past. 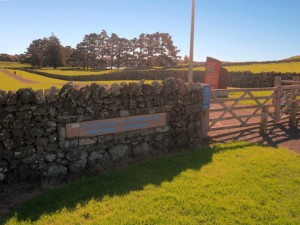 The stones which give the Otuataua Stonefields its name were flung out in successive volcanic eruptions and were used to demarcate garden plots and to warm the soil. Three now extinct volcanoes within the reserve are thought to have been part of the same eruption event. They erupted about 20,000 years ago and today scoria rock and lava bombs from these eruptions are still evident throughout the reserve.

The 100-hectare area was established to protect and preserve the archaeological remains of the communities that thrived on this land for hundreds of years. Less than 200 years ago the 8,000 hectares of volcanic stonefields in the Auckland area were settled and cultivated intensively by early Maori. Settlements on these fields were probably the largest and most densely populated in New Zealand at the time. 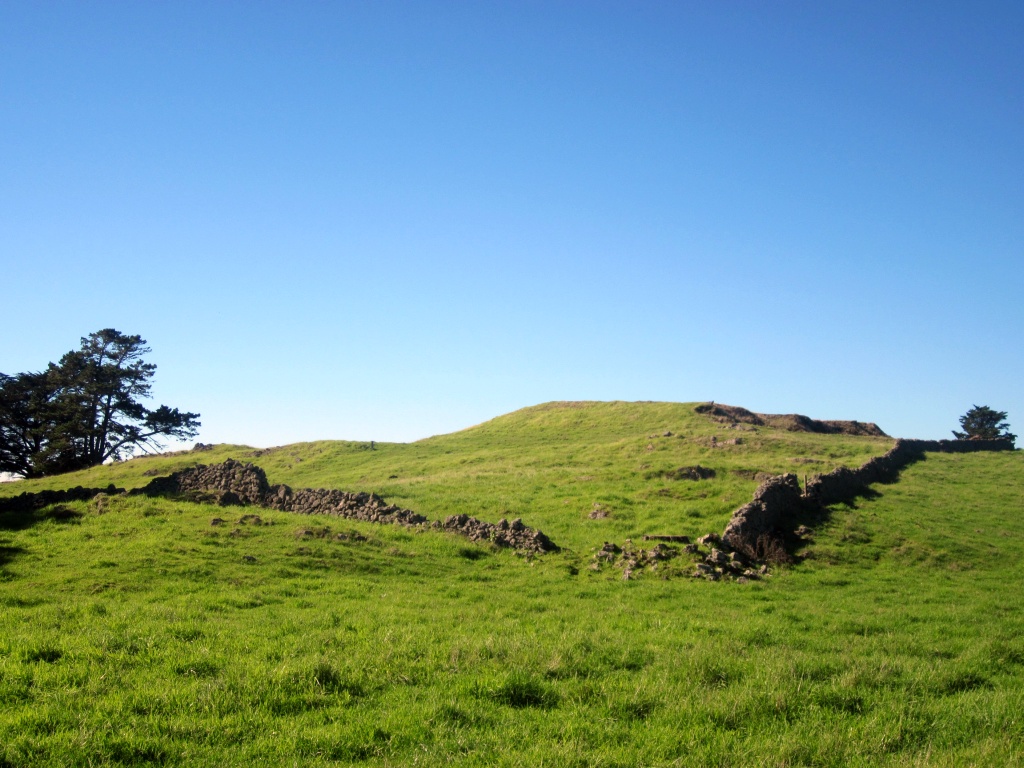 The stored warmth from the sun was held in the underlying volcanic rocks and provided an extra month or more growing season for Kumara, and later for Taro and Yam. They also acted to trap moisture in the soil for longer periods during the summer. In fact the entire Mangere area with its volcanic soils was prime market garden land before it was swallowed up by housing projects.

The remnants of the settlements in the area have been almost fully destroyed over the last 150 years by urbanisation and farming, and these stonefields provide a rare set of information for archaeologists and students concerning traditional life and customs.

Native birds are scarce but you may hear a fantail (Piwakawaka), Tui, New Zealand Pigeon
(Kereru) or Silvereye (Tauhouo). The coastline adjacent to the reserve is home to sea bird species such as the South Island Pied Oystercatcher, Godwits and Knots. Two species of native skink – the copper and ornate – are also present.

Some of the species of original native rock forest you can see include Karaka, Mahoe, Porokaiwhiri, Whau, Titoki, Puriri, Ngaio and various ferns. The reserve is also home to a 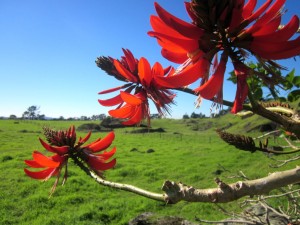 rare and highly endangered plant called Mawhai or the native cucumber, which has not been recorded growing elsewhere on the New Zealand mainland since 1866

On the isthmus almost all the remains of these old gardens and settlements have been covered up by Auckland City’s roads and pavements, buildings and backyard gardens; to the south they have also been largely built over, or quarried away. Spectacular dry stone walls criss-cross the area, built 100 years ago to both clear the stone and fence the farms.

Stone formations estimated as being at least 1000 years old have been found.

The reserve area contains three former quarry areas, a holiday bach site, drystone walls erected by the original European farmers in the area and the former Otuataua Pa on adjoining land has, according to one information source, been almost completely quarried.

Descendants of Te Wai O Hua, the earliest Maori in the area, are still living next to the Stonefields at Makaurau Marae, and the stonefield area together with the volcanic cones Puketaapapa (Pukeiti) and Otuataua make up an important part of their sense of identity, their Whakapapa.

As well as the evidence of Maori occupation, the land contains a record of over 100 years of European farming.

When Otuataua stonefields came under threat of quarrying, the land was purchased in a joint project between Manukau City, the Department of Conservation and Auckland Regional Council.

There are stories of those that lived and died there, still remaining on the land, tending their gardens and living as it was before. The land holds much beauty and history.

Haunted Auckland spent a hot and sweaty four hours one afternoon trekking the hilly terrain to survey and photographically document this mysterious and beautiful piece of historical land.

In one area, we entered into a bowl-like crater formation, dotted with volcanic scoria stone piles, walls and seemingly human-made structures all over-grown with lush grass.

It was in this area that we experienced unusual and sporadic EMF (Electro Magnetic Field) Meter readings. The “Cell Sensor” meter responded with readings between 1 – 2.5 milligauss.

Also in this area, a continuous and piercing, (almost electronic sounding) high-pitched squealing sound could be felt and heard. The sound source could not be located and it seemed to be coming from everywhere. 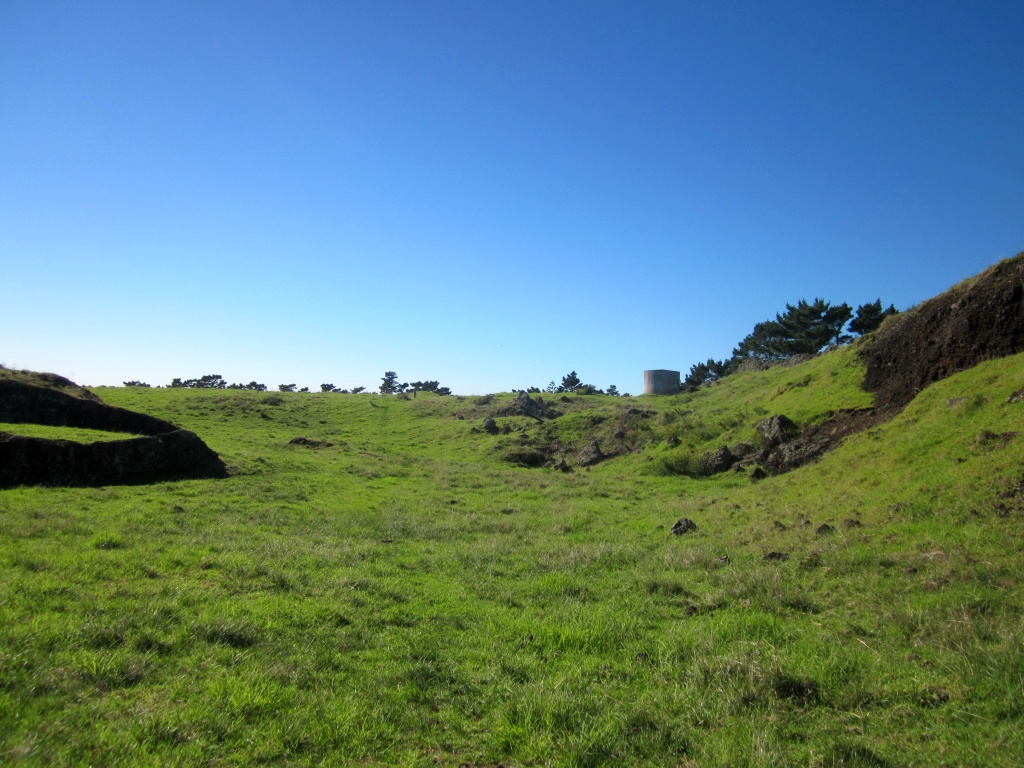 However, outside of this area there was nothing at all. No sound or further EMF readings at all.

As we didn’t have a good selection of atmospheric measuring equipment on hand during this initial reconnaissance, however it was assumed for that moment that the high energy readings could have been caused by earthly geomagnetic movements, due to the volcanic situation and history of the land.

However it was also thought strange that this activity wasn’t detected on any other part of the land that was surveyed that day. It was only apparent in the crater-like bowl of grassland.

Also of interest,  a compass which was being used did not react at all whilst the EMF meter was picking up the strange levels. Surely if the energy was magnetic (or geomagnetic) the compass needle would have reacted?

A couple of E.V.P. (Electronic Voice Phenomenon) communication attempts were conducted during the session, though nothing stood out as being unusual on review of the audio.

The peaceful, calming atmosphere is instantly noticeable. It is a land with special meaning and relevance.

The Otuataua Stonefields is open to the public, so pay a visit and spend some time soaking up the scenery and history.