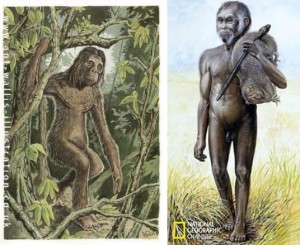 When I first traveled to Sumatra for first-hand investigations of the orang pendek, I was working under the model that these creatures were simply a relict form of Homo floresiensis, the recently discovered “hobbit” species from the nearby island of Flores.  However, the Orang Pendek Project has conclusively shown that this is not the case. The foot structure of the orang pendek is dramatically different than that of Homo floresiensis.  In orang pendeks, the hallux, or big toe, is divergent from the rest of the lateral toes as is the case in the other great apes.  In Homo floresiensis, the hallux is adducted, or straight in line with the lateral toes.  This clearly indicates that we are dealing with multiple species, and relict Homo floresiensis could not be the same creature as the orang pendek. Interestingly, there are reports from the island of Flores, where the fossils of Homo floresiensis were found, that might indicate that a small number of hobbits have survived until the present day.  The small, humanoid creatures found on Flores are locally known as the ebu gogo.  Additionally, the commonly reported “brown jack” of Australia is likely this same species, based on the footprint reports that I have heard from that continent which also have an adducted hallux, or a big toe that is in line with the rest of the digits..  Whether or not Homo floresiensis has persisted until the present day is open for debate, but the question of that species being the orang pendek has now been answered with a resounding “no.”  The hallux, or big toe, of each species shows that these must in fact be two different species.

The two photos below compare a footprint cast of the orang pendek (collected on September 6, 2013) with a reconstructed foot skeleton and femur of a fossilized Homo floresiensis.  In the orang pendek footprint cast, the hallux is clearly abducted, or out to the side like a human thumb.  In the reconstructed foot skeleton of Homo floresiensis, the hallux is in line with the rest of the digits, as it is in humans.