Moose – Alces alces andersoni, were imported from Saskatchewan Canada, into the South Island by the New Zealand Acclimatisation Society as a sporting animal along with red deer in the early 20th century. 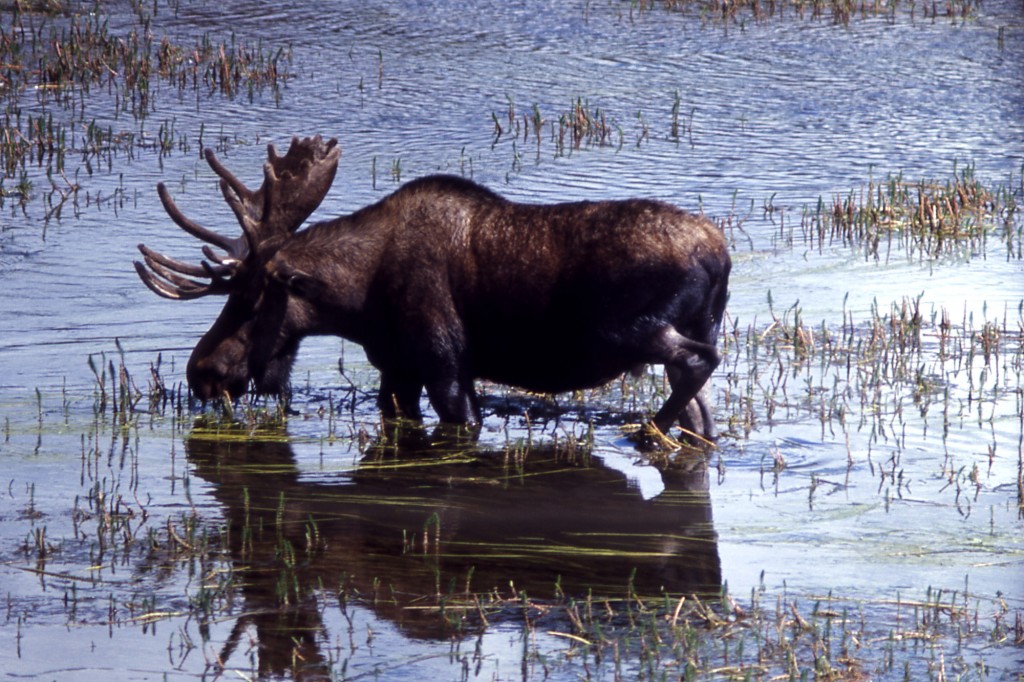 These animals supposedly failed to establish, and yet sightings persisted and evidence of their continued presence continued. The initial introduction occurred in 1900 when four animals from Canada were released in Hokotika. The initial release was supposed to have been fourteen animals but ten died on the voyage from Canada.

Out of these four animals only one was a cow, and was said to wander the streets of a local settlement until 1914 when it was no longer seen.These animals were presumed to have not survived and a further release was planned.

This occurred on the 6th of April 1910, when six female and four male, ten month old calves were released in Supper Cove in Dusky Sound. It was believed these animals died out due to the competition from Red Deer – Cervus elaphus, however a small number must have persisted as reports of physical traces and sightings continued. These sightings became quite prevalent between 1929 and 1952.

Herrick Creek was one spot where a bull moose was supposedly shot by one Eddie Herrick in 1934.

The last one sighted and shot in 1952 was presumed to have spelt the end of the establishment of a moose population in New Zealand, in fact it would have been the only population of wild Moose in the Southern Hemisphere. Nothing more was heard of the Moose apart from rumour and speculation until a possible sighting in 1971 sparked a hunt for a possible surviving population of these enigmatic animals.

More physical proof came to light in 1972 when an antler, definitely moose was found.

Ken Tustin was charged with finding out if they still existed on the insistence of the New Zealand Forest Service in 1972. Research conducted by Mr Tustin suggested that a small population may have inhabited the Dusky Sound area. This was based on prints, droppings, antler casts and signs of grazing.

No actual sightings of the animals were however forthcoming. The thick bush in the area kept them well hidden.

Mr Tustin did not give up the search and in 1995 a picture was taken of a possible female at Herrick Creek. A single frame from a video clip showed what appeared to be the retreating figure, regrettably the image was not a clear one due to the video being in time-lapse mode which causes some distortion to the picture. The outline and stance of the animal however were quite convincing.

A hair sample was found in 2000 and subjected to DNA testing. The test confirmed it was definitely Moose hair.

Further evidence of their continued existence was found in 2001 when two hunters came across some more hair. This sample came from Shark Cove on the southern side of Dusky Sound and was again confirmed as Moose hair.

Another hair sample was found by Mr Tustin in October 2002, snagged at waist height on some tree bark, this too was subjected to DNA testing and proved to be of Moose origin.

The hairs were collected opposite Oke Island.

Though no actual sightings have occurred since the 1971 one, there is plenty of physical evidence for the existence of these animals. These animals seem to be confined to the Dusky Sound area.

Bedding spots and physical evidence suggest up to 20 animals may live there ( Otago Daily Times 06.10.05).

Although the population is small these animals seem to be holding their own, though regrettably they have not been granted protection and are still able to be subjected to the hunters gun.

If these animals are to survive they need the protection to establish a stable population, which could be possible considering the number taken by hunters early in their introduction. The area in which they live is heavy bush and this has impeded visual sightings, but the evidence is there that this species holds on in their remote piece of Fiordland.