A new addition to the ”haunted” family arrived today; this one travelling up by courier from Christchurch.

Not too much of a back story on this one, really. Apparently the now deceased Mother used to talk to this little girl often when no one was around.
During visits the family would hear their mother chatting away to the doll in the sunroom where it would sit on a small table beside the mother’s favourite chair. When questioned, the mother just said that she ”always …talks to her”. On asking if the mother had Dementia, I was told that ”She was as sharp as a tack, so it was out of character for her to be talking to a doll like that”.

When the Mother passed away about a decade ago, the doll was put in a box and into storage, as no one wanted it. They always felt sure the doll was haunted so wanted nothing to do with it. The doll was found again by one of the daughters recently. An avid follower of Haunted Auckland, she thought we would be the perfect new home for her.
So thank you Diane for sending her to me. I’m more than happy to offer your Mum’s little chatty friend a loving home. Hope she likes it here and I’m hoping i’ll get to have some good conversation with her in the future.

If anyone has a doll like this, I’m interested in tracking down some history on the make of doll, as the daughter didnt know much about where it came from. Her head, arms and legs are painted bisque and she has a stuffed torso. 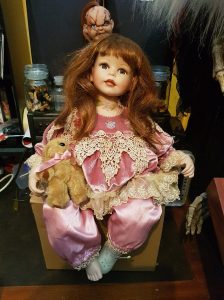