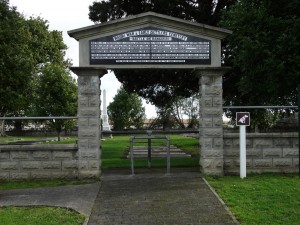 Rangiriri is a small town on State Highway 1, 17 km north of Huntly in Waikato. Here, on 20 November 1863, British troops and Waikato Māori sustained more casualties than in any other engagement during the New Zealand Wars. ‘Bloody Rangiriri’ was the decisive battle of the Waikato War.

Waikato Māori constructed the Rangiriri defensive line across the thin strip of land between the Waikato River and Lake Waikare. The main line, which ran for almost 1 km from east to west, comprised a front trench with a high parapet of banked-up earth and another trench behind. A small but extremely strong redoubt was integrated into the centre of the main line, and a secondary line of defences ran to the south facing the river.

On the afternoon of 20 November, Lieutenant-General Duncan Cameron attacked Rangiriri with some 1400 imperial troops. Cameron’s army was divided into two forces: nearly 900 men attempted a frontal assault, while another 500 landed upstream from the defensive line to cut off any Māori escape by land. The Rangiriri line was manned by about 500 defenders from tribes including Ngāti Mahuta, Ngātiteata, Ngāti Hine, Patupou, Ngāti Pāoa and Ngati Hauā. Despite success elsewhere along the line, the British failed in at least eight attempts to take the central redoubt. The next morning, a white flag flew above the Māori position. Although the defenders wished only to negotiate, British troops gained access to the redoubt and a short time later 183 Māori, including some women, were taken prisoner. With this act of British duplicity, the battle was over.

The exact number of Māori casualties is unknown. Forty-seven Māori, including four women and one child, are known to have been killed in action or died later from their wounds. Among them were Te Tutere of Ngāti Hauā, and Amukete Ta Kerei, a close relative of the Māori King, Tāwhiao. It is thought that 30 or 40 Māori were wounded. Forty-one Māori were buried in the redoubt’s trenches immediately after the engagement. Many, possibly all, of the remains were later exhumed. Some were reburied on Taupiri Mountain, while others are thought to have been returned to their own villages.

The British suffered 130 casualties at Rangiriri. Of these, six officers and 41 men were killed in action or died later from their wounds. The officers – Captain Henry Mercer of the Royal Artillery; Midshipman Thomas Watkins of the Royal Navy; Lieutenant-Colonel Charles Austen, Lieutenant William Murphy and Captain John Phelps, of the 14th Regiment; and Ensign A. Ducrow of the 40th Regiment – were buried in Auckland’s Grafton Cemetery. Many of the troops were buried at Rangiriri, probably according to regiment. It was later reported that ‘the dead were sewn up in blankets, and buried in rows only divided by a small space from the last resting-place of the enemy’s slain. Side by side they sleep in peace.’ In the late 19th century, the Royal Navy and four British infantry regiments erected two memorials to commemorate their dead at Rangiriri.

The New Zealand government was criticised at home and abroad over its alleged neglect of the burial ground at Rangiriri. This memorial gateway, designed by McNab & Mason, was erected as part of the government’s restoration of the Rangiriri cemetery, which had begun in 1925. Richard Francis Bollard, the Minister of Internal Affairs, unveiled the memorial gateway on 13 April 1927. Among the attendees were veterans of the New Zealand Wars. They included Captain James Stichbury and two as yet unidentified Māori who had taken part in the Rangiriri engagement.

Another part of the restoration project involved the replacement of grave markers with concrete slabs. By the mid-1920s, very few of the graves could be identified. One was that of Edward Lauchlan, a private of the 40th Regiment and General Cameron’s orderly, who was killed in the initial attack. The memorial’s inscription is misleading or outdated on several counts. Firstly, the British force at Rangiriri totalled some 1400 troops; the number of 850 on the inscription refers only to the frontal assault force. Secondly, the reference to a Māori ‘surrender’ is no longer considered to be an accurate interpretation of events.

Finally, it is widely accepted that 47 – not 49 – British soldiers, sailors and marines were killed in action at Rangiriri or died from wounds received there. It is significant that the six officers were buried in Auckland. This means that, even if the total number of British dead had numbered 49, there could not possibly be 46 British bodies buried at Rangiriri. One possible explanation is that some of the graves at Rangiriri Cemetery thought to be British troops may actually be those of early settlers and Māori, now unknown, who are also mentioned in the memorial’s inscription.