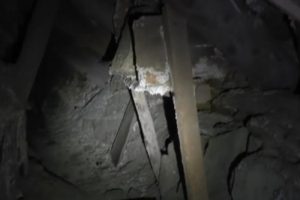 Another video clip that has been doing the news rounds lately, is this one.

The news article begins with… “An amateur film maker in the US has supposedly recorded the whispering words of a ghost in an abandoned Arizona mine. The man, known only as ‘Frank’, posted the video to his YouTube channel where it has received almost half a million views.”

We’ve all seen this scenario happening time and time again through the years. Warning bells! I’m betting money that it’s just a click bait viral marketing ploy for the torch he keeps on on plugging. Too many red flags in this one telling me it’s a hoax. He talks over the alleged voice sounds multiple times, instead of pausing to actually listen to work out what it might be.

To my ears he’s trying to cover up the sounds by obscuring it, so its not so clear to the video clip watcher. Also, why is he going out to a dangerous old abandoned mine, A) Alone. B) Late at night. (why not during the day? The mine shaft would be just as dark) and C) During a heavy storm? Doesn’t really make sense. To my ears the “voice” audio sounds studio produced. Perhaps with a digital Looper / Delay effect or even just basic overdubbing and overlaying of the voices.

Of course, as I wasn’t there at the time, I’ll never be able to give an accurate explanation and can only guess going by what I see and hear only. Only the guy that made the clip knows the truth on this one. My money’s on it being a hoax though.