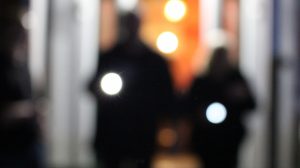 is needs to be said.

I’ve spent some of my time off, watching various paranormal team investigation videos on You Tube. Skimmed through about 10 in the past few nights.
One thing they all had in common, which I found frustrating and if I’m honest, embarassing. They all contained no actual investigation or science based research methods.
No experimentation, no actual trying to find reasons and explanations.

Maybe I just was unlucky with the ten I chose at random; but all ”investigations” I watched relied pretty much solely on Spirit box usage. Spirits Boxes, or Ghost Box / Franks Box are basically just a hacked radio that randomly sweeps through radio channels, often picking up fleeting snippets of noise, fragments of music and talking from radio show hosts etc.
They can also pick up on CB radios from taxis and other nearby vehicles. These gadgets are nothing more than a fad for the gullible and uneducated that are attracted to the cool-ness of being a ”Ghosthunter” like their paranormal TV heros.

All the docos I watched had a team thats ”exhaustive” research was pretty much a quick Google search, to find out the ghost stories and any deaths or macabre infomation that may be available about the location. Nothing more. They’d then go in and sit in each room asking questions and jumping with excitement at every sound that was randomly spat from their faulty radio. They truely believe that ghosts are communicating to them in the form of radio sound bites. Some will hear a fraction from a song as the scanner whizzes through the channels and believe that those few song lyrics are a reply to their questions.
Every bang, creek and click sound the teams would hear, got them excited. ”What was that?” being the repeated line for the night. Why no one got up to go look at what might have caused the souind, I dont know. Maybe paranormal investigators these days are too lazy to get up to go look. Aren’t they there to find answers?

So yeah, basically I watched each team, made up of obviously uneducated-in- the- very- basics, types. Wandering around in the dark with torches and head mounted lights, Go Pros aimed at themselves. Unless this is for a documentary to capture your reactions, it’s just a pointless selfie taking exercise for the inflated egos of TV star wanabees. Their ”high tech” paranormal investigation equipment consisting of a K2 meter (cheap and nasty and long proven as unreliable) and a Spirit Box. Oh, a couple were using a Kinect sensor set up. Which looks cool and could possibly be useful, but is prone to introducing many false positives and misidentification. Often mistaken for ghosts are curtains, coat racks, chairs and tables etc …many things can create the illusion of a stick figure entity in the room, unfortunately.
Two I watched were using table tipping, Ouija boards and pendulums as ”scientific” investigation techniques. Most teams had at least one Medium or ”gifted sensitive” type that would (typically) be the only one seeing and feeling the many ghosts apparently present in the locations. The details and reactions given by the Mediums would all then be noted on camera as evidence. Every video had team members filming and getting excited by dust particles floating past the Night shot camera . The odd insect flitting by got even more excited reactions.

For 2019, I’d like to set a challenge to all serious paranormal research teams out there.
Let’s do this research properly.

Let’s get educated in our chosen field and stop running around playing ”Ghost Adventures”.
Let’s read a few books and ignore all the flashy pointless gadgets on offer online by unscrupulous sellers cashing in on the naive and gullible.
Let’s start using our brains and all our natural senses.  Let’s use common sense while we’re at it, also.
Let’s observe, document, research, experiment, form hypotheses and theories, try to recreate, look for explanations, ask questions, compare findings with other researchers…… Let’s investigate properly.
I know this will fall on deaf ears to most reading it. Heck, I’ve (and possibly thousands of other researchers world wide as well) been continually explaining dust orbs and len flare for over a decade now and people still want to believe theyre deceased relatives looking over them…..but its always worth another crack. Hopefully.