Radio station The Edge, were doing an on-air promo to which one of their morning hosts, Mike Puru would be spending the night in the dark in the heart of the Spookers building. They contacted Haunted Auckland to determine whether Mike would be the only one roaming the halls that night.

The area they were utilising for this was next to the Children’s / Nanny’s room, the corridor around it and the room at the end of the corridor. Mike was to sleep in a tiny room opposite the children’s room. During our first visit, the door to that room had been closed so we could not access it. Apparently this door has always been closed up and never opened until now. The door had been removed to show a small room which was just big enough for a single bed. It was no bigger than a large cupboard really.

Haunted Auckland was called in to “check out” the area for any potentially paranormal activity before Mike would be shown it for the first time. Barbara was interviewed briefly on air that morning. 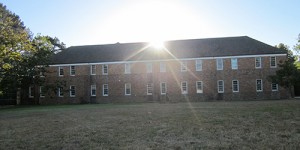 We arrived at Spookers and were met there by members of The Edge radio station. They explained how the night was going to go and asked us to go in and get our investigation started before Mike was shown to his room.

We went upstairs to the children’s / nannies room area and proceeded to start our investigation by taking EMF and temperature readings. These showed minor fluctuations but nothing to indicate that there was major activity in the area.

Barbara – “It felt calm and not at all spooky then and with all the radio crew there it was even less so. I was surprised to find that the area that is considered the most haunted in Spookers is the Children’s room which we were drawn to on the Sunday night!! It hadn’t actually felt haunted – more that there was something there just watching.”

“The room still had a “feel” to it but it was not oppressive or menacing in any way. It just felt like someone could be in the room and watching. The corridor around the outside of the children’s room and accessing the small “cupboard room” where Mike was to sleep had a feeling of residual energy from thousands of people who have walked those areas.”

After the investigation was finished we were escorted out of the building by a Spookers staff member. As we walked along the downstairs corridor, Mark’s EMF meter went off. We seemed to be following something along the corridor and when we stopped to ask questions to whatever was there, it seemed to follow our requests to move away from the meter and then to come closer to the meter. It was definitely a very interesting visit and investigation.

Some possible E.V.P s were captured by H.A during the investigation. We took hundreds of photos and recorded the whole event on two audio recorders.

Barbara – “I heard a loud whisper and asked if anyone else had heard it but no-one seemed to know what I was talking about and I scared the young girls who were there with the radio station. I seem to have got a woman responding to me during one EVP session. A woman answers me with a ‘Uuh haa!’. There also seems to be a man whispering a couple of things during the visit. In one (when we were talking in the doorway to the cupboard room where Mike was to sleep) a man can be heard clearly saying “Get Out!”, as well as another phrase which can be easily heard but the actual words are more difficult to make out.”

Also Sophie (A Producer from The Edge) was apparently touched and blamed radio host Dom, whilst we were all standing around talking in the child’s room. He insists that he did not touch her. Mark was looking at Dom at that time and verifies he did not see him touch her at any point.

There was also the incident with the EMF meter as Mark and I were being escorted out after the investigation. Marks EMF meter went off and we seemed to follow an energy as it moved down the corridor. Even when we asked it to come away the EMF meter seemed to indicate that it had moved!

This incident happened as Mark and Barbara were leaving and making their way along a hallway leading to the front entrance with one of the staff members.

Mark – “I had packed up all my equipment, but was still holding my EMF meter and was surveying the areas one last time as we made our way down. We noticed a couple of spikes here and there which were immediately noted to be caused by wiring and cabling in that area. We also noted a power box on our route. In one area we came to, we noticed the meter suddenly light up, going as high as 5 milligauss, then it would stop. While Moving the meter around the area it would spike again in a different spot. It seems the field it was picking up was moving around. It would appear, then disappear. The staff member told us it was very unusual as there were no power cables or power / fuse boxes in that area at all. In fact the whole section we were in had no power running through it at all.”

“The energy field turned up again so I held my arm out with the meter. I felt a suddenly cold wind brush my hand. The meter I was using at that moment is a Cell Sensor. It has a needle gauge, flashing light and emits a beeping to alert the holder of any close fields of energy. It started beeping and flashing slowly as we stood still and watched. It started at 1 milligauss and slowly started creeping closer till it was a full lit up reading of 5 milligauss. I then asked the ‘entity’ to “ please move slowly away from the flashing light” “Can you please move away from me?’ The meter started slowing down. The beeping and flashing slowed and the level went slowly down from 5 milligauss down to 0.”

“Barbara stepped backwards slowly as this was happening, calling and guiding the ‘entity’ back away from me with voice and arm motions. It was as if the energy source, whatever it was, was listening to us and obeying our instructions. The staff member with us was rather shocked at what he had just witnessed. An interesting experience indeed.”

Barbara – “Good considering that we were really there to check the area out for the Edge Radio station! It was great to be able to go back to Spookers so soon after having been there only three nights before. It was nice to be able to just focus on one small area and to spend a lot of time getting full readings, taking heaps of photos and lots of short EVP sessions. On the other hand it was difficult as there were a lot of other people there (radio staff) for the majority of the time and they were talking through EVP sessions. Under the circumstances I think we did very well!”

“After that night, I feel that Spookers is both intelligently and residually haunted. I feel that it is residually haunted by the thousands of people who have walked the corridors and rooms of the building when it was a nurses home and during its time as the Spookers attraction. I also think that is haunted by at least one (and possibly two or more) intelligent spirits due to the messages we received on the audio recorder during conversations through our visit. We also had a very strong response on Marks EMF meter as we left the building and this seemed to respond to requests we made for it to move as well as a few responses to my questions.”

Mark – “Well it was certainly great to get back into the building again. Love that place! The session was rather rushed this time, though we were left alone for a bit to carry on with data gathering and hopefully finding what the radio hosts were wanting us to find there. i.e. Ghosts. Although on this night, the spooks didn’t come out to play for the cameras. The EMF session was the highlight for me on this one. What was triggering the meter off, is unknown. We couldn’t find the energy source at the time. Though the fact that it seemed to be moving around was certainly an interesting experience.” 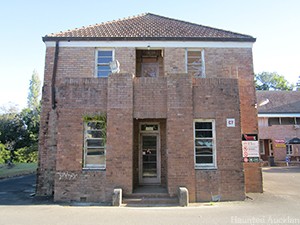 The radio station’s audio crew recording the session found some audio anomalies whilst reviewing their recordings. One interesting capture sounding like a children’s jewellery / music box playing briefly, in the distance in the early hours (incidentally, we heard this same Circus / Music box tune as we were gearing up for the follow-up investigation).

It was being piped through the speaker system for atmospheric spooky effect, so not sure as to whether the incident involved some fakery at the time from either the two Spookers staff that were staying the night there also, or the radio station wanting to ’up’ the scariness factor for their listeners. Perhaps a simple glitch / fault in the speaker, sound effects system causing it to start playing the tune? Perhaps it was a genuine paranormal experience? That’s something that only those that were there on the night will know.

Also captured was an interesting artifact floating down past their video camera as Mike was sitting on the bedding with crew standing around. In our view, possibly a piece of falling spider web or bed sheet lint / fluff. 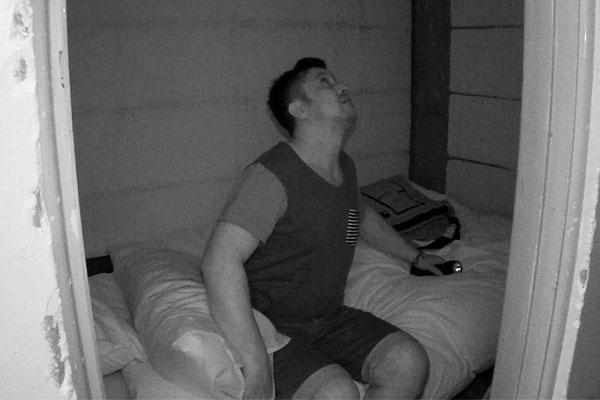 A big thank you to Jay-Jay, Mike, and Dom from The Edge for inviting us to come along and check out the Spookers building.
Enjoy watching highlights of Mike’s night at Spookers at The Edge Website.