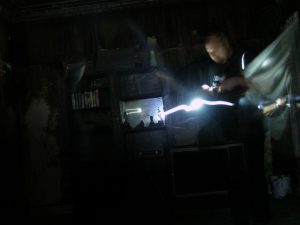 We at Haunted Auckland are forever trying out ideas to work around the myriad theories surrounding the vast paranormal field. So many theories regarding the “what” and “how” etc., of the various aspects within paranormal research. It’s all part of a natural progression for the team. As we learn and experience, we grow. Experimenting with new gadgets, DIY projects, trialling assorted tools, toys, as well as light – and atmospheric – generating and data gathering devices, to hopefully uncover an answer or two. It’s about thinking outside of the proverbial box: breaking away from the commonly used and now mainstream ideas and investigation tools, which, after all these years, if we’re honest, haven’t really turned up much in the way of evidence at all.

In this field, everything is worth trying. Every angle is worth looking at. Nothing is absurd. Every idea is valid – no matter how ridiculous it may sound at first. If the world-standard practical options aren’t showing up anything but data that is vague, obscure, impossible to see, hear and are failing to gain any actual scientific or rational momentum or interest, then maybe we should be expanding our minds and ideas a bit more.

The simple fact is, after all these years of paranormal research, no one has solid, conclusive proof that ghosts exist; what they are, what they are made of, how are they created or where they come from.

Personally, I normally don’t have too much issue with other paranormal research teams. To each their own, I say. We work with a few teams around the country and network with many others worldwide. As each case is different, so is each team. A paranormal group is only as good as those in it, plain and simple. Some choose to get educated, know their field, their equipment, the histories, the theories, the practical and the scientific alternatives; whilst others choose to carry on, naive and completely unaware of what they are doing or why. They know nothing of how to use their gear properly (or even what the gear was originally designed to do), they have no scientific leanings, can’t take a clear photo, and have no idea how to correctly review, analyse, edit and store audio and video footage for further reference. The ability to behave in a professional manner is also something that is a rare thing these days, with the growing number of teams sprouting at great speed from the influence of television and internet paranormal shows.

One quite niggling but important concern I’ve had regarding the behaviour of a number of self-appointed paranormal groups in the past, is their willingness to go into a family home and declare the presence of some form of paranormal happening – often times within the first few minutes of being there.

It surprises me when I see uneducated and self-appointed wannabe paranormal investigators running around in dark rooms, getting excited when their cheap and overly – sensitive K2 meter toy gets a light flicker, and automatically leaping to “it’s a ghost!” and from there start trying to communicate with it like it’s a confirmed and actual spiritual entity.

An EMF meter will flash. So they immediately get excited and start shouting questions at the gadget, hoping for a reply without even thinkng to look for possible causes for said flickering.

With the client in the room with them, they’ll start talk of feeling a dark presence, or that they “feel there is someone there.” I have heard more than a few times now, of investigators stating straight up that they feel there is the presence of a demon there. Yes, demons. Automatic, go -to answer… DEMONS.

Many a time, this is done with little regard or thought for the potentially damaging impact this could have on the individual hearing this. The client is trusting that the team they’ve invited into their home knows what they are talking about, and are experienced enough to handle such matters. The impact is obviously even greater for more vulnerable individuals, such as those suffering from mental health or substance addiction issues. Sleep disorders are also often labelled as demonic occurrences by uneducated  investigators. The paranormal research field is indeed varied. Perhaps a little too varied? All we have are various people, with various theories, beliefs or faiths, and personal opinions. Where’s the science? Where’s the analysis? The experimentation? The process of actual investigation? Something to think about? Perhaps THINK is the word to dwell on? Is there enough THOUGHT in this field?