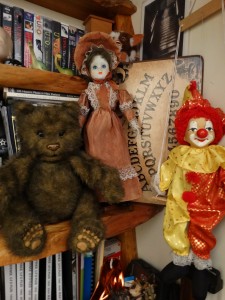 Thought I’d introduce you to a few from my ‘haunted’ family of toys that I’ve been collecting through the years.

The porcelain doll (her name is Maryanne), was given to me about 10 or so years ago. She was from a deceased estate auction amongst a truck load of other items. The new owners wanted to get rid of her as they claimed she would move. They never saw it, but were sure they could hear her at night, moving around in the room. When they would check on her, she would be in a different position than last seen. I’ve filmed her on numerous occasions, and as yet, haven’t seen or heard any movement from her. I live in hope though! The clown was given to me by a family having a garage sale. It was in a box of free stuff that no one wanted. They didn’t want it back in the house, as they said it moved. They had seen it swinging numerous times without explanation and they thought it was ‘creepy’. Because I’d just bought a book about ghosts from their sale, they asked if I wanted it. Its hanging in my studio. Then there’s an old Ouija board, given to me by a mother wanting it out of her house. Her daughter had it and the mother wanted it gone as she claimed her daughter was becoming rebellious and a problem, and blamed the board. This was about 12 years ago. Recently I was gifted a bear. (thanks so much Shelley!) He’s real cute, has a motion sensor in it and growls, sighs and is fully animated in his arms/legs and head/ nose/mouth. Problem his, he freaks everyone out. Hence he was re-homed. He moves and makes sounds whenever he damn well feels like it. Even when closed up in a box. (which he’s reportedly opened by himself) Never at the times when the motion sensor system would usually trigger such a thing. The cats are very weary of him. They’ve sniffed him cautiously and given him a swipe or two…of course he’s growled back at them.

Now, I’m not saying these toys are actually HAUNTED, or for that matter, POSSESSED. I have yet to see any activity from them that id consider paranormal.

It’s the stories, the claims, their backgrounds… that I find most intriguing.  If they are connected somehow to a supernatural realm, then I hope to one day be able to document something. Do I talk to them? Yes. Do they answer?….not that I can hear. Most of these toys were destined to be destroyed or thrown out. If you have a toy or item in your home that you feel is haunted, possessed, (or just not quite right), please let me know, ok? In the name of furthering research, a love of history, intrigue and genuine curiosity, please consider letting us adopt your ‘unwanted’.