In the early 80’s in Rotorua, New Zealand, I was living in a flat in Gwendoline St (there’s a motel there now) – it was half a house shared with a friend from work (and who I also played in a band with). I was in my early 20’s living in Rotorua doing lab-technician training for the Forest Research Institute. 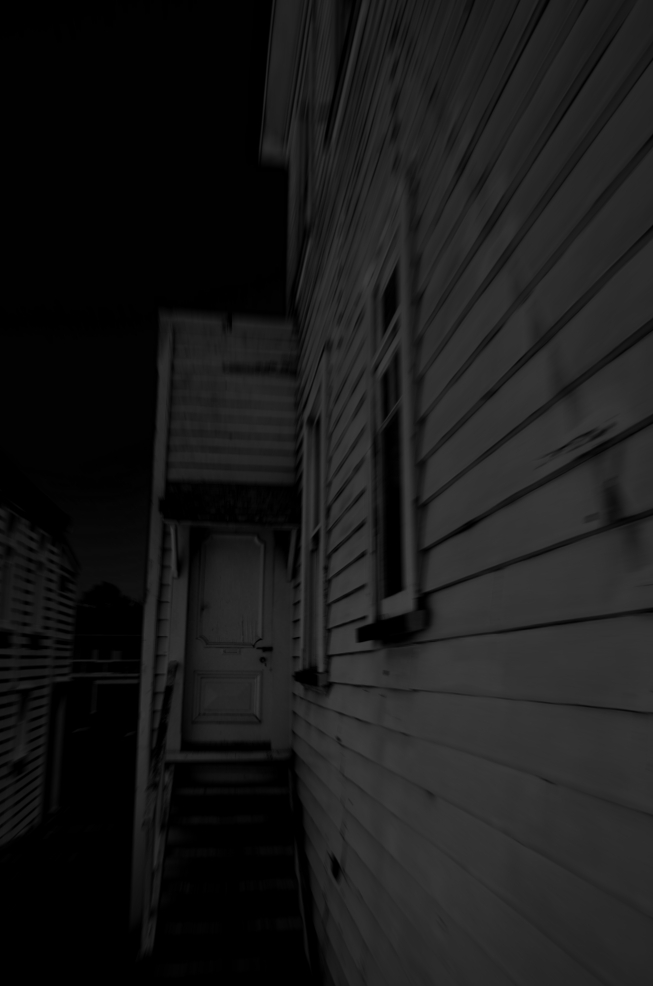 There was a girl living in the other half of the house that we really only saw when she was complaining about the volume of our stereo system (I’ll admit it was pretty damn loud at times). My flatmate had to head down south for some forestry work (he was a woodsman), and I ended up getting to know the girl from next door a lot better. Her name was Sue. I didn’t play the stereo anywhere near as loudly apparently. We hit it off, and a few months later when I was struggling with being able to pay the rent in my flat by myself, I moved in with her. There was nobody in the front flat for the rest of the time we stayed there.

Sue’s side of the house had access at the rear door only – the front door was blocked off because it opened into the bedroom. The back door was glass with a net curtain behind it, and even before any of the weird stuff happened it always felt like there was someone standing behind that net curtain. It’s the sort of feeling you just brush off instantly without even considering it. Later, when the weird stuff started happening , I found out that one of Sue’s friends had once flatly refused to come into the house when visiting because she felt like there was something bad in there.

The weird stuff started happening so gradually, it was hard to notice when it really began. There was always noises and creaks in the house, and the floor creaked as you walked through the lounge into the bedroom. We’d be lying in bed and there would be a sequence of creaks like someone walking through the lounge to the bedroom – we’d both turn and look at the doorway, and of course there was nothing. We put it down to just an old house.

It did this a lot though –always in that same sequence as someone walking. It was maybe a couple of times a night, and somehow, you always had to look at the door. It was a little annoying but not scary. This went on for a few weeks, and then we started hearing things in the ceiling. Like something running across it, from our side of the ceiling to next door’s side. It sounded like a monkey with three legs running pretty fast.

Now I know what you’re thinking, and let me tell you I had exactly the same thoughts. It was either a possum on the roof or a big rat in the ceiling.

Let me just do a bit of a diversion here to describe the house. It was white stucco plaster on the outside, with no purchase for climbing creatures. There were no overhanging trees or anything to allow possums up there. It had a corrugated iron roof, which has a pretty characteristic sound with a possum on it. I’ve had a few possums on my roof over the years, and I’ve also been in a flat where water rats have stolen an entire 10kg sack of dog biscuits in one night.

Sue and I looked at the ceiling as this running sound happened, then at each other. We both agreed it was pretty weird. I went outside to see if I could spot anything on the roof. Nothing. The next day I crawled up into the ceiling to see if there were any signs of rats – looking for rat poop basically. When I was up there I observed that the ceiling space had been walled off between the two flats.
I couldn’t find any clues, or any rat poop, but we still just put it down to rats or something.

The strange noises in the ceiling continued. The noises were not the scratchy, small thumpy noises like rats make, they were softer and heavier sounding – that’s why I mentioned a three-legged monkey before – it sounded like something bigger and softer. I know rats in the ceiling can sound a lot bigger than they are, but this was definitely heavier, and it was definitely from the ceiling – not the tin roof.

At this point it still wasn’t really scary, although that sense of dread was gradually increasing when you came to the back door to come in – that feeling of something or someone behind the net curtain. It was easy to fight that feeling though – especially on a nice sunny day – and tell yourself not to be so silly.

The next stage was some typical haunting clichés – short bursts of whispering. These would just happen randomly. Sue and I would look at each other, and frown, listen for a while but it wouldn’t come back while we waited.

One night we were in bed watching TV – it was a British comedy programme – actually it was “The Plank”. Sue and I were both laughing, and we stopped, and for a second there was another laughing voice in the room that kept going (male), then stopped. We looked at each other and were both kinda freaked out – this was starting to get a little scary.

Anyway – there were weeks of this gradually escalating – more whispering, floor creakings, more noises in the ceiling – now bumps and thumps pretty regularly – some billowing of curtains on closed windows on windless days, a dangling mobile moving around way more than it should have been, spiders coming out of the shower drain, and the feeling of dread increasing. It now felt like somebody was outside the windows looking in at night.

Here’s the weird thing though – you know how you see horror movies and people are in a haunted house, and you’re just like “Why don’t they just leave? I would if it was me.” Well, the power of denial is very strong. I’d go off to work each day and tell people about it and we’d laugh – some of my workmates would scoff and others would tell their own ghost stories (there were some weird things going on in Rotorua – one friend’s bath would run itself). It’s easy to be a sceptic when it’s not happening to you at the time and I always found ways to explain it away.

This weird “normalisation” each day made it harder to deal with as time went on. It was like having two separate existences – one was the daily grind at work where the weirdness was some kind of imagination (and the sceptical side had more power), and the other was an increasingly terrifying home life at night. This was perhaps the thing that made it worst of all – it was never bad enough to just up and leave the place, because each day in the sunny real-world, it didn’t seem that bad. It really started to mess with our heads.

I think the kicker for me was the night there was what sounded like really-loud sawing on the water pipes. It sounded like it was in the kitchen – which was adjacent to the back door. With my awesome powers of denial, I thought it was probably a rat chewing on the water pipes and got out of bed and decided to hunt through the kitchen cupboards looking for – yes, rat poop.

While I was rummaging through the cupboards under the sink, there was an indescribably loud noise from the ceiling above my head. Okay – I will attempt to describe this noise. It sounded like an elephant rolling onto its side, on the ceiling. It was that loud, and that heavy-sounding. It sounded like the ceiling was going to collapse. It was a huge, long movement.

I’ll admit it scared the bejeesus out of me. I ran through to the bedroom and asked Sue if she heard it, but she had heard nothing (!) – almost unbelievable considering how incredibly loud it had been to me. I grabbed her big horsewhip (she was a dressage judge in training) and ran outside to see if there was anything on the roof. I knew there wasn’t going to be, but I knew nobody would ever believe it wasn’t just a possum on the roof unless I looked. I was kind of in one of those crazy adrenaline-fuelled frenzies where fear had maxed-out into stupidity. Anyway – there was nothing at all outside or on the roof.

At this point, we decided that it was all becoming unbearable, and so our first plan was to ask around and see if anyone else had been through something like this and knew how to get rid of malevolent spirits from a house. There was apparently a woman in town who did house blessings to get rid of spirits, so we went to visit her and she agreed to come around the next day after work.

By the time I got home from work the next day, Sue and the woman were already there.

Wow! The house was completely different. It was quiet, peaceful, free from whatever had been there – you could actually feel the difference immediately. I asked the woman what she had done – she said she hadn’t actually done anything yet – it was like that when she turned up. Apparently whatever was there had already gone. The woman still went around and sprinkled blessed water around the place, and said there were a few other non- malevolent minor spirits around, but they wouldn’t give us any trouble, and if they did, just treat them like naughty children.

After that the house remained peaceful and quiet – not only did it feel better, but strangely, all of the creaking had vanished – including what we had thought of as typical “old-house” creaks. The house was completely and utterly silent after that. Not even any rats or possums. This absence, to me, was the strongest evidence that what had been happening previously was not natural.

Of course, like any typical horror movie – there’s a small coda to the story.

When we finally did leave there to move into a new place (the current landlord wanted to sell the place), Sue took along an old wood and glass cabinet that the original owner had promised she could take. We had spent the whole day moving stuff and finally did the last load just as the sun set.

As we walked away from the car to the new flat, we were about 15 feet from the car when its headlights came on for a few seconds and then went back off. The car didn’t have any fancy remote control or alarm system – this was the early 80’s remember. I stupidly said to Sue – “did you do that?”.

The next day, we took the cabinet back to the old house, and that, as they say, was the end of that.

Although I’m curious as to whether there have been any weird incidents at the motel that now stands where the house used to be.