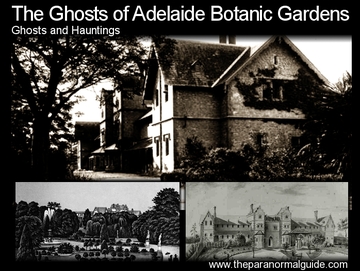 In  1836, South Australia was officially settled as a freely planned  British settlement (rather than a convict settlement). It was not long  till the first suicides, born from lunacy, were reported.
In  1839 two people committed suicide due to ‘states of lunacy’. It was decided that  those exhibiting deranged tendencies should be put into medical care and  detainment for the safety of the public and themselves.
Soon after the Adelaide Gaol was built in 1841, lunatics would be  segregated within its walls. It was reported that in 1846 there were  four male and four female patients housed within the gaol. It became  readily apparent that a prison was no place for the treatment of  lunatics and after a public outcry South Australia’s new lunatic asylum  was built in 1846. It was located on the grounds Glenside now occupies,  and was a simple wooden construction made up of eight rooms and a  cottage.
This place was named ‘The Colonial Public Lunatic Asylum’.

By  1849 this humble asylum was over capacity, and a new asylum was  planned. In 1852, Adelaide Asylum opened its doors. The Adelaide Asylum  was located up against the grounds of the botanic gardens, off North  Terrace in Adelaide. In 1862, this asylum too was stretched to  breaking point, with more patients than it could accomodate (some  having to sleep in beds in the corridoors) and in the mid 1880’s  construction began on the larger ‘Parkside Lunatic Asylum’ (Glenside  hospital today). Adelaide Asylum remained in operation until  1902, when it closed its doors to the insane and became a hospital for  infectious patients. The hospital closed in 1938, and was demolished,  its grounds made part of the Botanic Gardens.   Some of the  structures from the days of the Adelaide Asylum still remain intact  within the Botanic Gardens. The most macabre being the morgue, now in  use as a tool shed, its mortuary slab as a potting bench.

As  for ghost stories? They are really few and far between. One may expect  odd goings on within the morgue/tool shed, but nothing has been  reported. There has been the odd cry and scream heard within parts of  the gardens, but not much more than that.
Well nothing human in origin anyway.
It is said that years ago you could see the fleeting glimpses of black  and white objects skulking amongst the various bushes and shrubs. When  approached they would disappear, vanishing without a trace. Some would  swear they looked like the apparition of a dog. Why would a dog be  haunting the gardens?
Years ago the gardens had a problem with  stray dogs on the grounds. One of the grounds keepers was tasked with  the job of getting rid of this problem. What he did is quite  questionable indeed. He would either bait or shoot the animals, and as  for the disposal of their bodies? He would just dump them under one of  the bridges!