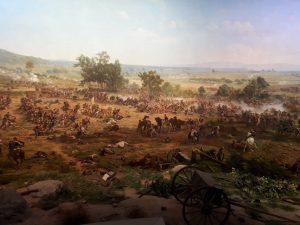 The battle of Gettysburg occurred over the first three days in July 1863. This was the bloodiest battle of the American Civil War when the Union (North) army and the Confederate (South) armies fought for the future of the United States and according to some historians the Battle of Gettysburg was the turning point in the Civil War. Over these three days 82,289 Union Army, under the command of General George Mead, and 75,000 Confederate Army, under the command of General Robert Lee fought the largest battle ever known in North America. General Lee had hoped that the South invading the North would convince the US government to give up the war and allow the South their independence. However during this battle the North (Union) defeated the Confederates (South) and seriously damaged the hopes of the Confederates that they would ever achieve the independence they desired.
General Lee had chosen the small town of Gettysburg for his attempt at invading the North, as it was easily located and there were ten roads that lead into the area. It is estimated that 569 tons of ammunition was used during the battle. Almost one third of the soldiers engaged in the battle became casualties with 28% of the Union army and 37% of the Confederate army listed as dead, wounded or missing. Of the casualties 7,058 were fatalities, 33,264 were wounded and 10,790 soldiers were listed as captured or missing.
The 2000 or so inhabitants of Gettysburg were left to deal with thousands of the wounded. Homes, churches and any suitable buildings were used a field hospitals for those injured in the battle. At these field hospitals amputated limbs lay in heaps and were buried in piles. Volunteers came from both the north and the south to take care of the wounded and bury the dead, who lay under the summer sun until they were collected and interred. The 5000 horses and mules that perished in the battle were put into piles and burnt leaving a stench, which lingered in the town for weeks. Today the Gettysburg National Cemetery and the Gettysburg National Park are among the most revered historical landmarks in the US. Half of the battlefield has been preserved as a national park, however many historically significant locations lie outside of the park.
The town is now a tourist area with people visiting the battlefields and paying homage to the thousands who perished during that three-day battle. Along with people with people who have a historic interest in the area the town is also a magnet for enthusiasts of the paranormal as it is said that Gettysburg has the highest concentration of haunted places in the U.S.
We were lucky enough to spend two days in Gettysburg (including the holiday of 4th July). The Lighter Farmhouse is a private home, which was built during the Civil War and also offers bed and breakfast style accommodation. It was used as a field hospital during and after the Battle of Gettysburg and according to the current owner the two downstairs front rooms were used as operating theatres. Each room has windows on either side of the room and the wounded (most of whom required amputations) were literally lined up the windows, then rolled in the window for their surgery. It is said that piles of limbs grew around the house before they were finally burnt and buried!
Apparently apparitions who seem to be reliving the battle have been sighted around the house, guests report being awoken in the night by strange sounds and doorknobs seemingly turn themselves. During our time there however we did not notice anything paranormal.
The battlefield itself has very little left. The area where the main battles were fought have been made into a living monument with a museum,many statues and monuments and kilometers of roads. We headed off one morning to follow the battlefield audio tour and did not finish it.
We had to return the following day to complete the tour.
These are a few of the hundreds of photos we took around the Gettysburg battlefield area and the home which was once a field hospital.