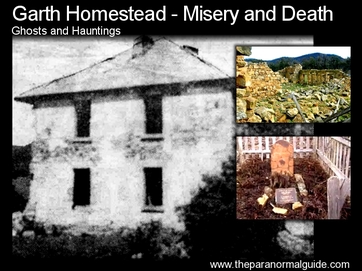 Garth Homestead, in the Fingal Valley, Tasmania, is known not for the fear it puts into those who visit after dark, but rather the terror. It is a rare occasion indeed, for a paranormal investigator to last a full night.
From a rejected mans suicide, to a drowned girl and her nanny, Garth has it all. It is unlived in, as those who have tried have never lasted long, always leaving due to the otherworldly inhabitants that do not like to be disturbed. Who could the spirits be that reside in the ruins?

A Most Haunted Site

Garth  Homestead, now part of the Rostrevor Estate, is located along the Esk  Highway, in the Fingal Valley just North East of the town of Avoca. What  was once a solidly built two storey sandstone building, is now reduced  to a set of crumbling ruins, located on a hill looking out over the  South Esk River. During the day you may find historic groups looking amongst  the ruins, trying to recapture some of the splendour of this very early  part of Tasmanias history. By night, the ruins take on a completely  different feel, for it is said that Garth is one of the most haunted  sites in Tasmania. The ghosts of Garth come in the form of  shrieks, moaning and howling of the sad and lost souls that still reside  there. Many an investigator and thrill seeker has left the location, in  more than a hurry, and it is not just humans that feel the presences.  Horses are said to shy away from the location, refusing to take the  rider closer than a few hundred meters from the buildings remains, and  grazing livestock will not venture near the area.

The  history of the location has been told through many newspapers, and more  than a few books that detail haunted locations around the country. It  seems that in the 1950’s, newspapers from around Australia took an  interest in promoting the stories of tragedy that marred the otherwise  scenic site. Many websites and online journals also detailed the  location. The following, is a montage of different versions,  from many sources. Most agree on certain aspects, and it is with these  that I keep it together omitting one off pieces of information.   The story of Garth begins in the early 1830’s when an Englishman (name  unknown) travelled to Tasmania and was granted a plot of land. With  convict labor, he soon set about building a grand two storey sandstone  building, not just out of necessity, but also out of love. The  Englishman had left behind the woman he loved, promising her he would be  back to collect her once the new home was almost complete.   When all but the ceilings and plaster work was complete, he travelled  back to England to collect his bride to be. Upon arrival, he learnt that  while he was away she had fallen and love and had married another man.  Dejected, the Englishman returned to Tasmania and killed himself in the  courtyard of his still not completed home.

Tragedy was about to  strike again, as new owners moved  into the home along with their young  girl, and her convict ‘nanny’. The  nanny was very strict and would  threaten the child with being thrown  down the well, if she did not  behave. The little girl took this very  seriously after the nanny had  held her over the well by the ankle.   One day the girl did cause  some sort of trouble, and thinking she knew  what was to come threw  herself down the well. The nanny, guilt ridden  tried to help her charge  but also fell in, both dying in the freezing  waters. Soon  after, a Scotsman named  Charles Peters, was granted some land nearby,  and in the late 1830’s he  also took over the lands containing the Garth  house. The home was  still very well, kept so Charles Peters moved into  the house with his  family. In September 1840, Charles Peters   two year old daughter Ann ran into the parlour screaming, her hair and   clothes were on fire. Ann had been watching the house staff making  jams  over the fire, when she got too close, and the flame caught her.  Ann  Peters did not recover from her burns, and her small grave can be  seen a  little way from the ruins.   Charles Peters and his wife left  Garth in 1845, after they built the  now Historic Fingal Hotel. Garth  went to his eldest son who leased it  out. The house soon suffered badly  during a fire, after which another  of Charles Peters’ sons moved in.  Thomas Peters restored the house, but  near completion another  devastating fire went through the building. The building stayed in the Peters family till 1922 though no one has lived in it since the start of the 19th century.    Some people may say that the ruins of Garth Homestead are the most   famously haunted ruins in Tasmania. Others say that the story and the   history surrounding some key deaths is completely unfounded. Many say   that either way it makes for a good ghost story. I will leave it up to   you to decide.