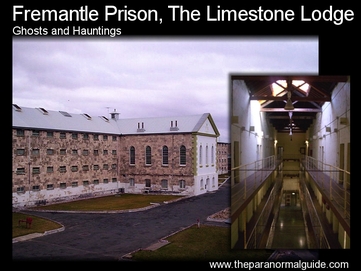 Fremantle Prison was home to some of Australia’s most notorious criminals, before it closed its doors in 1991. It has since become a popular haunt for those looking at experiencing the paranormal, and is quite well known for the dark, shadowy figures that call the now empty cell blocks home.

History of the Limestone Lodge

The  area where Fremantle is situated was first colonised by the Swan River  Colonists in 1829. These were ‘free settlers’, and in 1849 they  petitioned the British government to have skilled convicts sent over as  laborers. Soon thereafter seventy five prisoners arrived at the  colony and were accommodated within the harbormasters warehouse until a  permanent prison could be built.   Between 1851 and 1859 the prison was constructed utilising the  limestone from the nearby quarries. The first prisoners were moved to  the still under construction gaol in 1855. Once construction had  finished the ‘chain gangs’ were sent as labor for other public works,  including the Fremantle Asylum. The prison was originally titled the ‘Convict Establishment’ but was also known colloquially as ‘the Limestone Lodge’

In 1867 Fremantle Prison received its long lived name. By  this time,  there were less than sixty convicts being held in the  building, which  was built to accommodate more than one thousand. As  less convicts were  being sent to Australia, numbers in the cell blocks  declined, and in  1888 the final ship load of prisoners arrived.  However, with the closing  of the Perth Gaol and the gold rush of the  1890’s, Fremantle prison  once again saw itself at full capacity. New  areas were constructed and  out dated buildings were converted for other  uses, the bakery turned  into accommodation for seventy women prisoners  for example. An  interesting fact is  that when the prison was being constructed, large,  deep shafts were  sunk into the bedrock, so that water could be sourced  from natural  limestone aquifiers. This water was so clean and pure that  soon the  prisoners were sent to work manually pumping water for the  surrounding  colony. The want and need for this water  was so  great that over 1000 meters of horizontal tunnels were  constructed under  the prison, to allow better, more efficient access.   Fremantle  Prison was officially decommissioned in 1991, after 136  years of  continual use. In earlier years, royal commissions suggested  the prison  for closure due to conditions within the prison, which had  caused more  than one riot.

During  its operating life, the prison executed 44 people, and has known some  very notorious inmates, including, but not limited to: David  John Birnie. David and his wife Catherine were a pair of serial killers  who murdered four women (aged 15-31) at their Perth home – 3 Moorhouse  Street, Willagee. The crime was known in the media as the Moorhouse  Murders. David Birnie took his own life in 2005, the day before his  court appearance for the rape of an inmate

Eric Cooke, the  Night Stalker. Cooke was the last man to  be hanged in WA. Cooke  committed 22 violent crimes, resulting in 8  deaths. His crimes baffled  police due to their random nature. Cooke  would also steal cars and  commit the crimes before returning the stolen  vehicles to the owners who  were unaware. Cooke is buried in Fremantle  Cemetery, his remains placed  on top of child killer Martha Rendall  (also executed at the prison).

Prisoners,  visitors and guards have all reported paranormal phenomena within  Fremantles walls. A lot of activity is said to take place around the  solitary cells and gallows. Apparitions are seen both day and night,  objects have been moved and thrown within the cells by unseen forces and  some people feel the almost unbearable sensation of dread and  depression while walking the lonely corridors. One of the most  disturbing encounters is that experienced by one gentleman as he was  walking through section 1 (short terms, remand and juveniles). He was  taking photos when he saw a shadow like figure walk out of one of the  cells. It stood and turned to face him as it let out a yell/groan. This  figure then bolted down a flight of stairs, its form disappearing as it  did so. Only two out of thirteen shots of that section turned out, but  unfortunately none to suggest the paranormal.