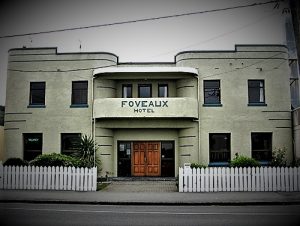 A ghost named Mary is said to haunt the Foveaux Hotel in Bluff.

The hotel’s current owner Sherry Shelton claims the building is haunted by a ghost named Mary and that she has seen Mary out of the corner of her eye.

The ghost is thought to be Mary Cameron, the original owner of the Temperance Boardinghouse. It was built in 1899, and demolished in 1937 to make way for the Foveaux Hotel.

Mary is said to haunt room 2 of the hotel and is “a friendly ghost”.

The kitchen’s heavy door had opened and slammed shut

Claims of footsteps upstairs being heard and are something staff claim to hear often.

“She had a white blouse on with the sleeves rolled up. Her hair was up in a bun. She was probably in her early 40s. She had on a long black skirt. She looked like she’d been working. But you never know if such things are figments of one’s imagination.”