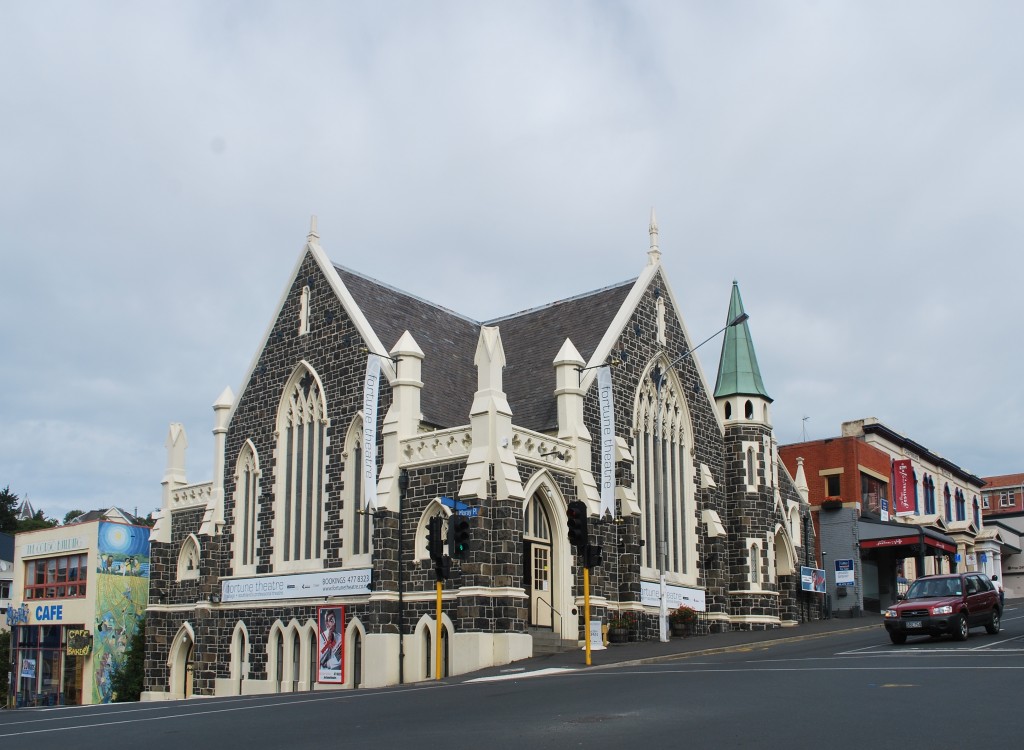 Financial difficulties in 2000 threatened the theatre with closure, and forced the sale of the building to the Dunedin City Council. The council currently leases the building back to the Fortune Theatre Trust.

The Fortune Theatre company was co-founded by David Carnegie, Alex Gilchrist, Murray Hutchinson and Huntly Elliot. The company has been operational since 1973 and from 1974, was initially in the 105-seat Otago Cine Club theatrette at the rear of the Athenaeum building of the Octagon. However, after hiring full-time acting staff in 1977, it was decided that the venue was too small to continue to be viable. Since 1978, the Fortune Theatre has been in the former Trinity Methodist Church which was opened in 1870 and is close to the city’s centre.

The Trinity Methodist Church was designed by Scotsman R.A Lawson and made of the local materials trachyandesite and Oamaru stone. The former church is an example of Gothic Revival Architecture and contains a “Rose” stained glass window which is at the back of what is now the theatre’s main stage.

In 1994, the Fortune Theatre performed a play about the tragedies of William Larnarch’s family, titled “Larnach – Castle of Lies”, before 100 invited guests in the ballroom of Larmach Castle.

“It was a night to remember. As the guests arrived a terrible storm blew up from nowhere. The smoke from the fires blew back down the chimneys so that you couldn’t see – and your eyes hurt. Hail crashed on the iron roof so that you couldn’t hear. Doors mysteriously opened by themselves and it got very cold. In the play – just as Larnach shot himself there was a blinding white light. Afterwards at supper people were talking about the lightning strike as Larnach held the gun to his head. I said `Oh no that was stage effects.’ We asked the stage manager. He said `It was none of our doing, it was lightning.’ I think that Larnach was present that night. He didn’t like the play.”

In 2005, the theatre was featured on Ghost Hunt, a New Zealand TV Show, as it is claimed that the theatre is haunted. Not long after the Fortune Theatre moved into the old church, tales spread of “sinister voices” being heard offstage and well-secured lights falling from the lighting grid. A phantom audience member has also been reported by theatregoers on numerous occasions. Reports continued to come from a variety of reliable sources until the claimed hauntings of the Fortune Theatre became a part of Dunedin folklore.

A lighting technician claimed that he was all alone setting up on stage one day when he “glimpsed a person” over his shoulder on the edge of the stage and thought that “they were reading through some lines, as an actor would” but knew no cast members were around at the time. He turned the stage lights on and “suddenly they were gone”.

A man who ran the box office claimed to have had two “disconcerting” experiences. The first experience involved a “young boy sitting in the corner”. He initially “thought nothing of it” but the “realisation struck” him that the theatre was closed. He “turned back around, but he’d disappeared.” The second experience involved a girl he claims he noticed when he “looked up to the back corner of the audience seating, near where the soundman usually sits” after he heard “a strange noise in the theatre” on one occasion.